This is a continuation of my travel series covering our Mediterranean cruise in July of 2010. Today focuses on our day in the port of call of Naples. We took an excursion that visited Pompeii, Sorrento, and Capri, Italy. See my Mediterranean Cruise Day 1 post for the introduction and the end of the post for links to each port of call on the cruise.

Day 5 Highlights:
This posts begins with a little disclaimer that applies to all posts from here on out.  Our trip was HOT.  And by hot, I mean that most days, by the end of our excursions, we were covered in sweat and our clothes were literally wet.  So, please keep that in mind as the photos each day progressively get scarier and scarier and we start to look like death warmed over!  Also in most pictures from here on out, we have little number stickers and radios around our neck so we could hear our guide.  Such great fashion statements!
The port for the day was Naples and is a three-way tie for one of my favorite places the entire trip.  My main goal was to see Capri, but a co-worker said we had to see Pompeii and my other co-worker’s daughter said we had to see Sorrento.  Thankfully there was an excursion that covered all three.  The problem with these in-depth excursions is that you have to meet around 7:00 a.m. to leave {so you have to get ready and eat breakfast prior to then}.  Keep in mind that with the 9:00 p.m. dinner, we usually did not finish until 11:30 and there were several nights we went out in lieu of going to bed right away.  So most of the days were done on five hours or less sleep each night.
First stop was Pompeii.  This was truly amazing.  I seriously cannot put into words all the amazing things we saw these days.  I really did  not think I would enjoy this {but knew my husband would} as I am more interested in beautiful beachy areas, not those packed with history lessons.  However, Pompeii was incredible.
In 79 A.D., the town was wiped out with the volcanic eruption of Mount Vesuvius.  There was no magma or lava, only ash and stone.  The town was literally buried alive in 21 feet of ash and stone and the site was only discovered about 250 years ago.  At the time it was buried, the population was around 20,000 and it is amazing how advanced they were at the time.  There is still a huge section that still needs to be excavated so it will be interesting see what they uncover.
Here we are bright and early, with no idea what we were in for. 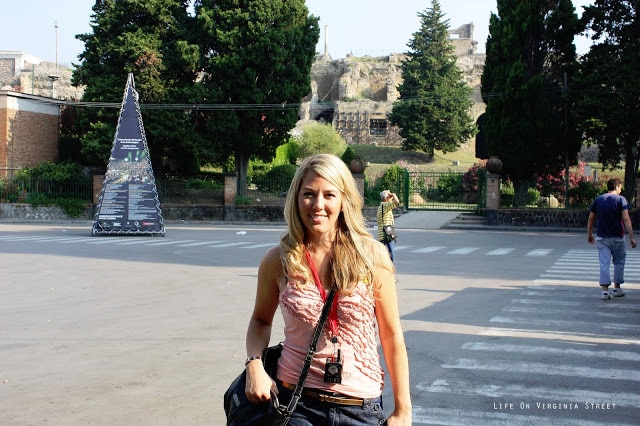 The practice stadium for the gladiators.  They would come out the little doors.  Keep in mind that anything made out of wood is a replica, as the wood all perished in the volcano.  Anything you see made out of stone is original {so unreal} and anything made out of brick is either reinforcement or replacement for pieces that may have perished. 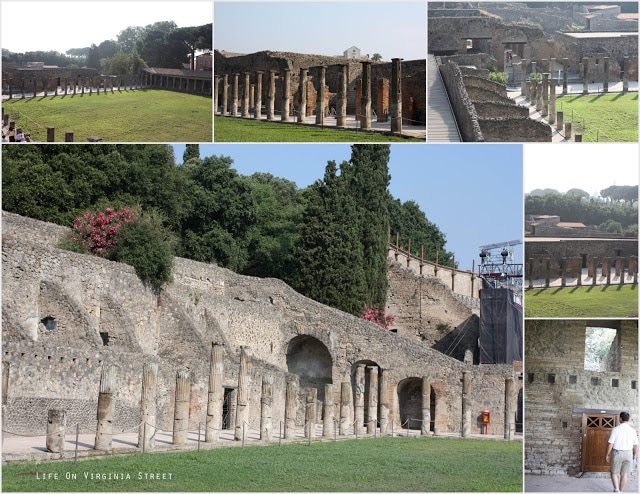 Here you can see our amazing tour guide, Giulia, and us walking through the ruins.  Giulia was the best tour guide and was SO knowledgeable. 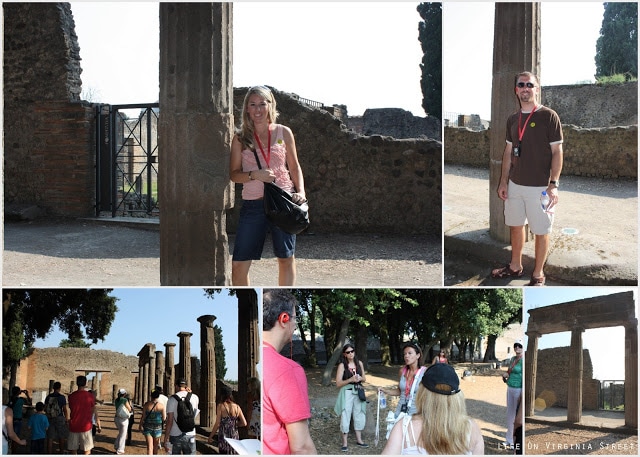 At this point my low battery warning came up on my camera.  To say I was a little mad at myself was an understatement.  So, I really had to conserve what I was taking photos of at this point because we still had a long day ahead of us.
Here are some streets and sidewalks as well as one of their public fountains for fresh water.  It still boggles my mind that they had running water back then, thanks to the Roman aqueducts.  In Pompeii, they used the various fountains to tell directions.  If you wanted to tell someone where you lived, you would say it was near the corner of such and such fountain. 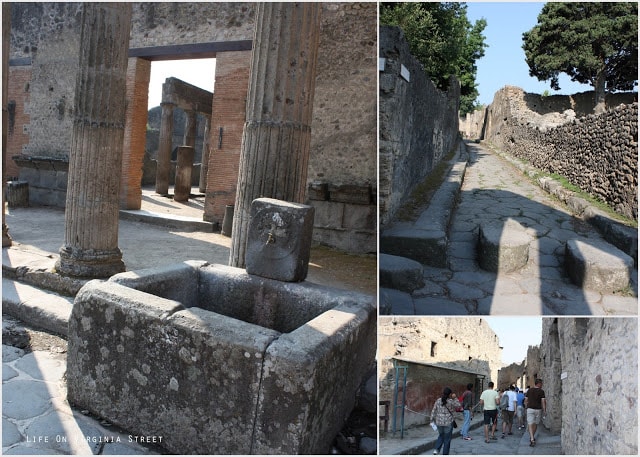 They had a red-light district even clear back then, and this is a picture of the brothel house along with the painted “menu” of what you wanted.  The frescoes on the menu are all original so they are nearly 2,000 years old! 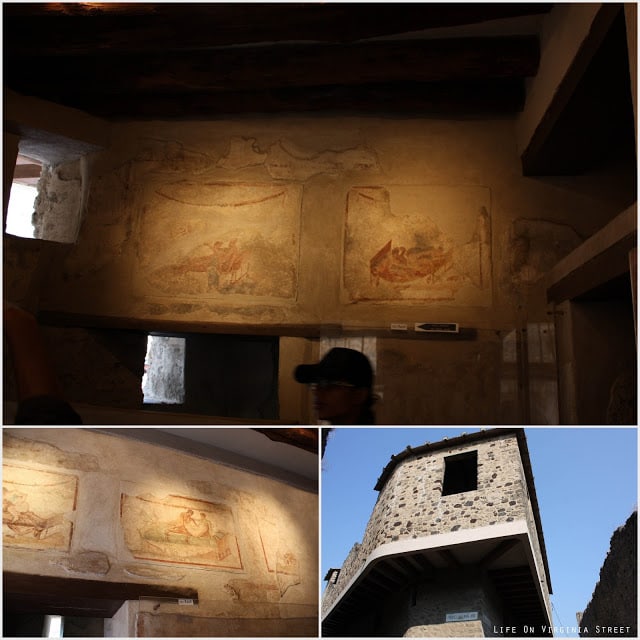 Here is the main square of Pompeii.  It was breathtaking and I cannot even imagine how overwhelming it was during its prime.  The pillars were originally two stories around the entire perimeter of the square but this is all that remains.  You can also see Mt. Vesuvius in the background of one of the photos. 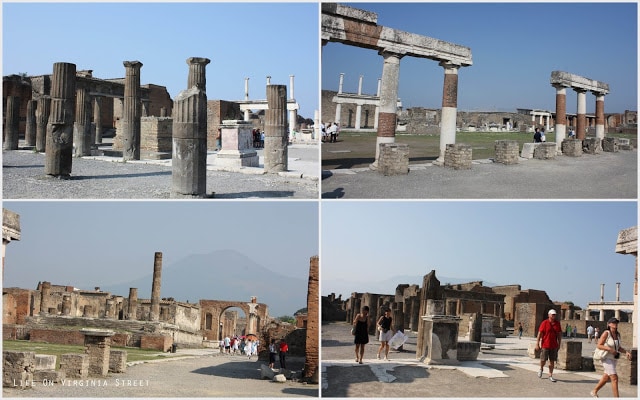 Here are artifacts they have recovered.  This area had literally thousands upon thousands of items including bodies of humans and a dog, pots, vases, statues, artwork, etc. 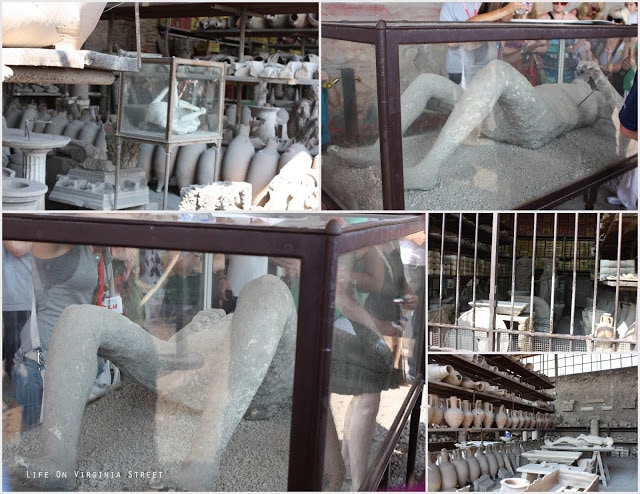 Perhaps the most breathtaking part of our two hour tour.  The spa and gym.  It amazed me that this stuff was around back then.  They even had technology to make a sauna {and I swear it still worked because I literally about passed out in the heat}.  This area was so surreal and beautiful from the domed ceiling to the frescoes to the lockers to store their items.  It was all just unbelievable. 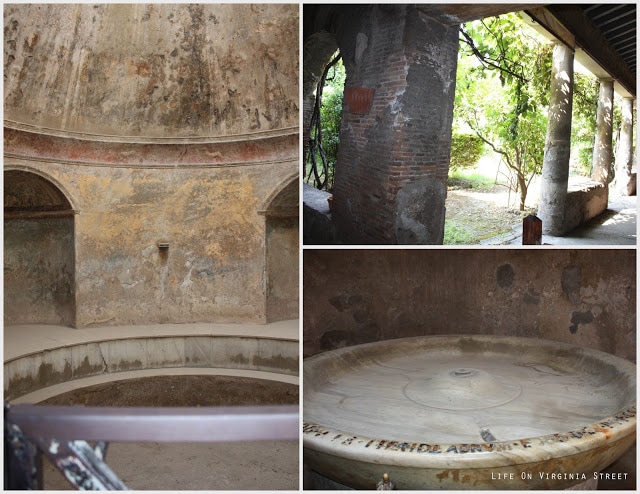 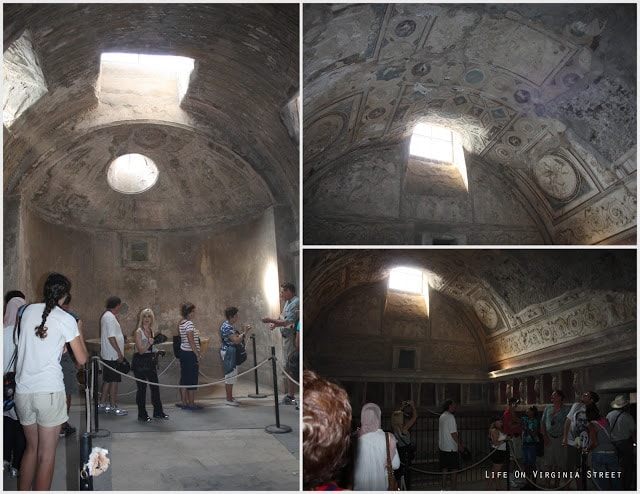 A few more random pictures prior to our departure. 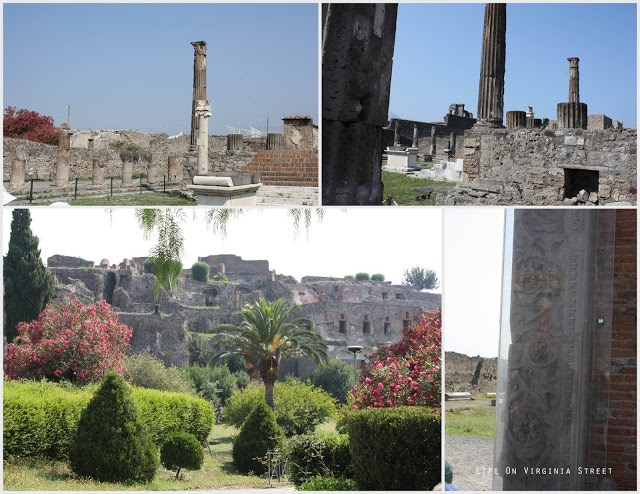 Thank heavens we went here first thing in the morning.  Within an hour of our arrival it was in the 90′s outside and there were thousands of tourists that had shown up.
We then took an hour drive to the cliff-side town of Sorrento.  The drive was so beautiful and we had great views.  Unfortunately, my camera battery died within two pictures here. My husband and I wandered around during the free time our guide gave us and we found a voltage converter {thankfully I had my charger with us}.  So we borrowed an outlet at one of the shops we visited and they let me charge my camera battery there if we agreed to buy some stuff.  Hey, whatever it takes.  You know photos are my priority!

So, here are a few of the photos we got in Sorrento once my battery was charged.  We also had an authentic lunch at a restaurant, which was included in our tour.

Shots from the drive there and our arrival in town. 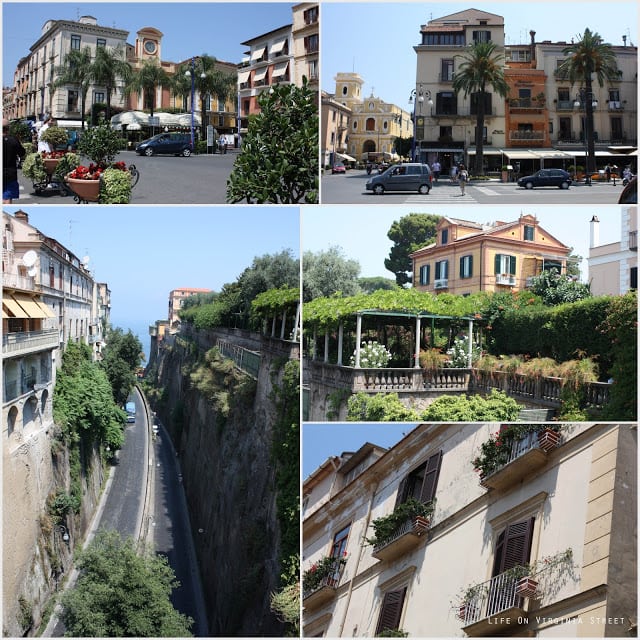 While strolling around town and during lunch.  I love the little, tiny coffee cups. 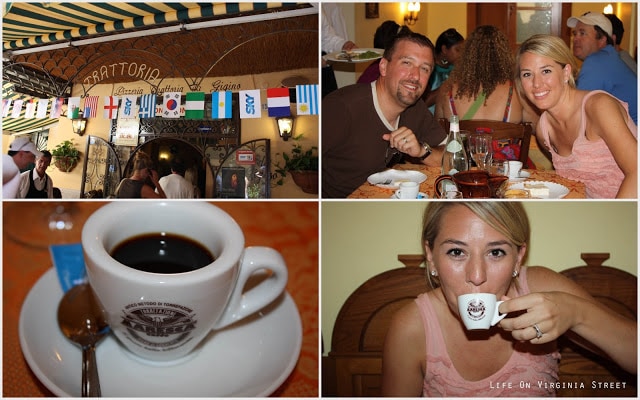 I love that they use orange, lemon and lime trees to line their streets.  They make for a beautiful street scape.  I also loved the little scooters and pretended one was mine… The fresh food markets are also amazing and were scattered all throughout the streets of each country we visited. 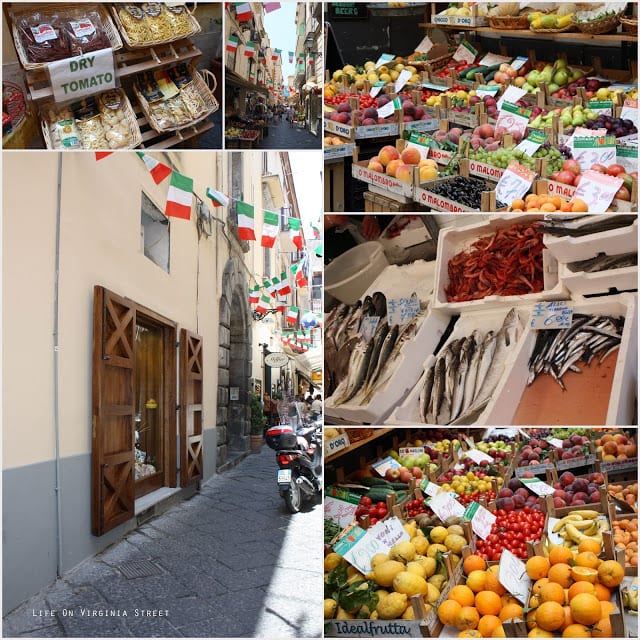 One of the best parts of Sorrento was leaving.  That sounds weird, but it gave us the chance to hike down the cliff of Sorrento to the beach.  Seriously AMAZING views. 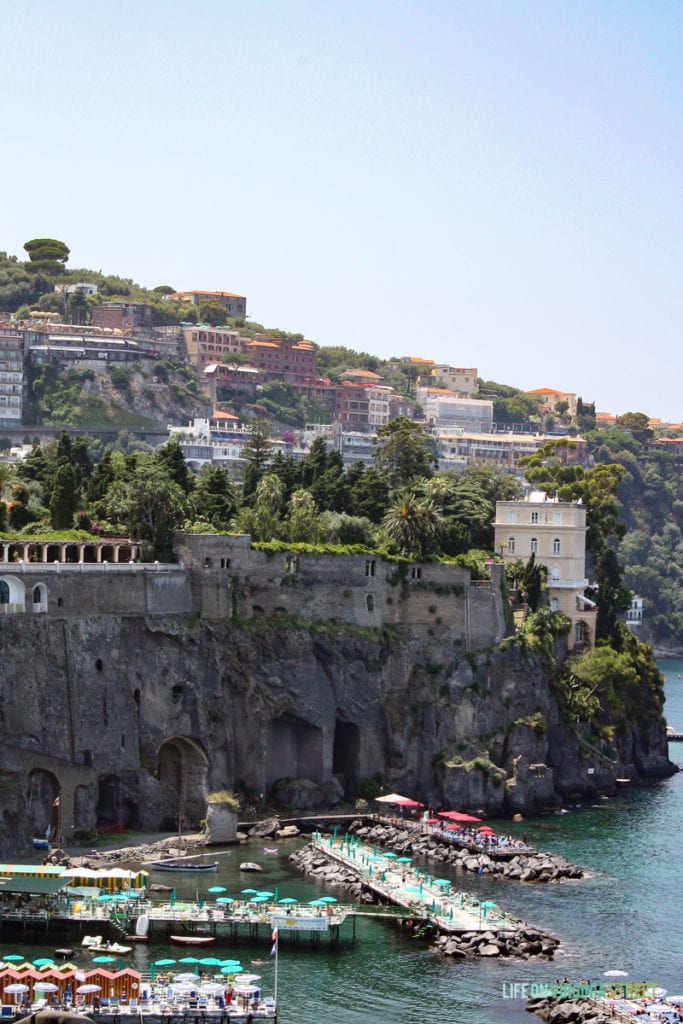 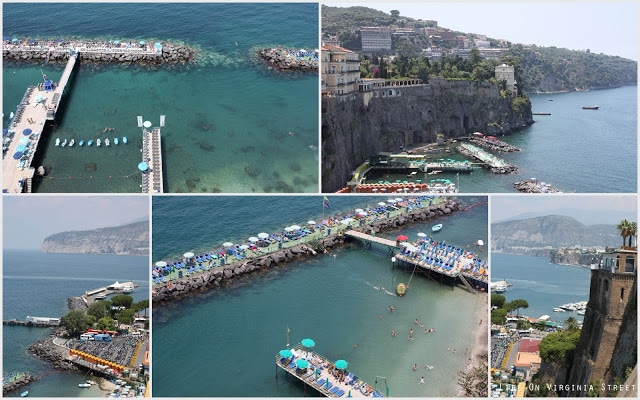 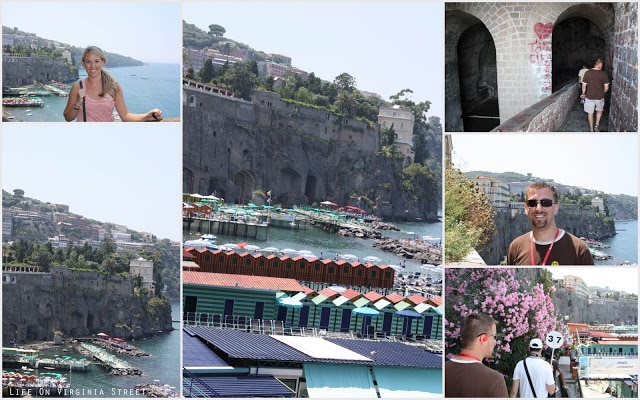 We left Sorrento on a funicular.  It is basically a huge ship/ferry you can drive cars on, etc. and the upper passenger area is like a really wide airplane.  We then arrived at the amazing island of Capri.
The island of Capri is divided into two areas.  Basically the lower area on the beach and then the upper cliff side area with the main town and resorts.  I have never seen a more breathtaking town in all my life.  I would move there in a heartbeat.  Here are some pictures of the lower area where we arrived and eventually departed. 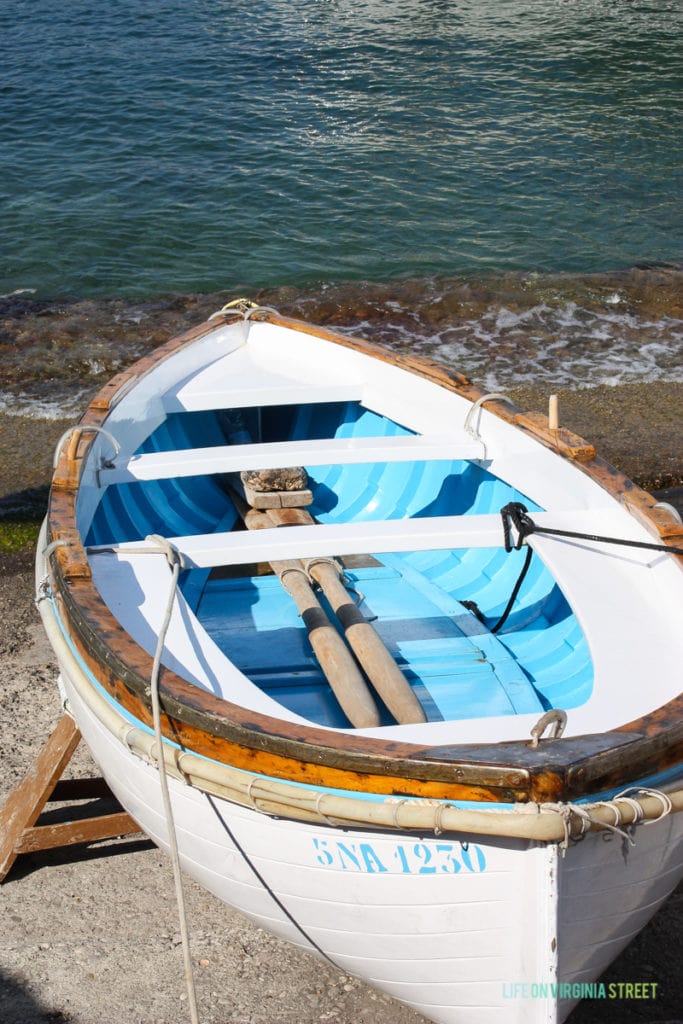 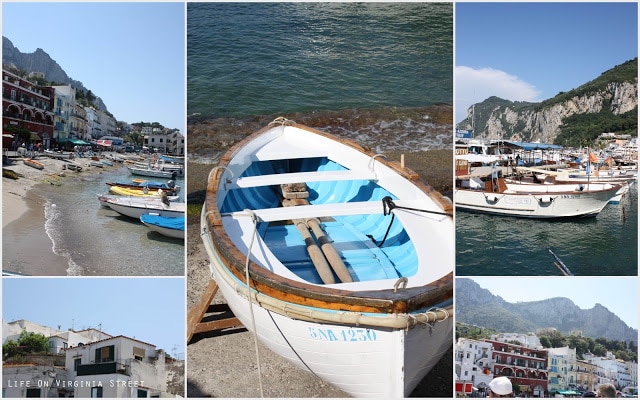 You then take a tram/train up the mountain to upper Capri.  I have never seen so much beauty.  We were so hot at this point {the tram wasn’t air conditioned and even though it was only a five minute ride we were dying by the time we got to the top}.  So, we got fresh lemon slushies at the top that tasted so amazing. 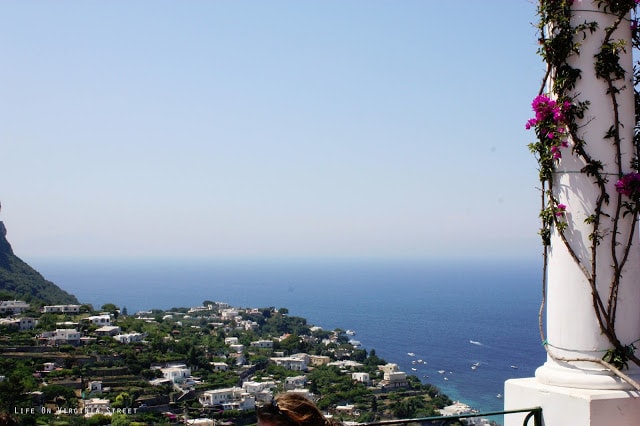 Walking through town to get to the backside of the island, meanwhile passing some incredible shopping {which was way out of my league}: 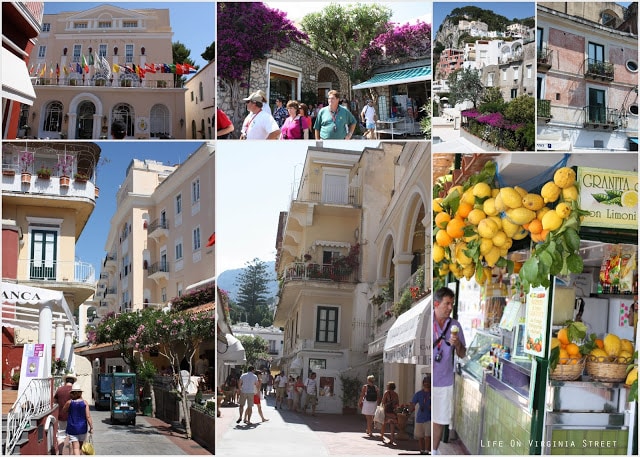 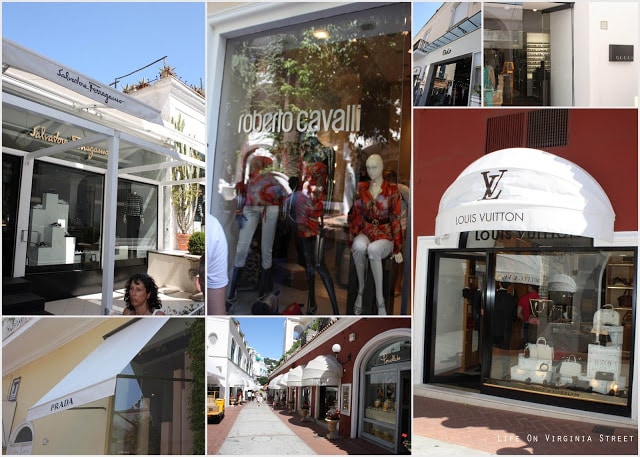 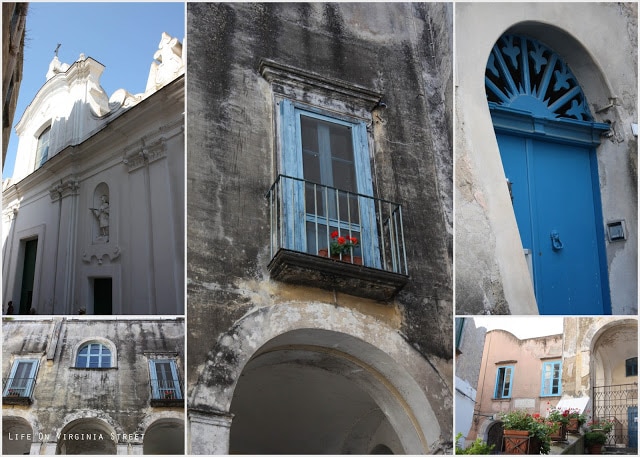 And now for the back side of the island.  The views were absolutely breathtaking and epitomized the beauty of the Mediterranean Sea. 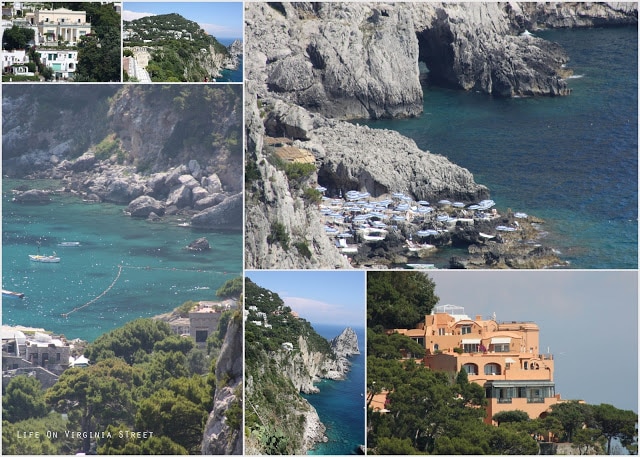 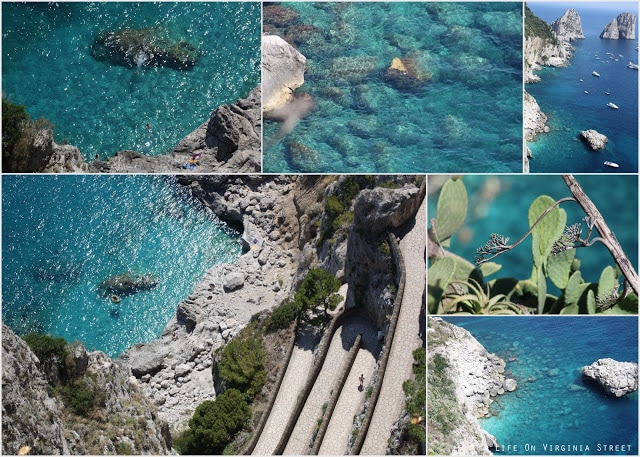 On our walk back we got Italian gelato – and here is where I am talking about the sweat and exhaustion.  Wow, I looked great! 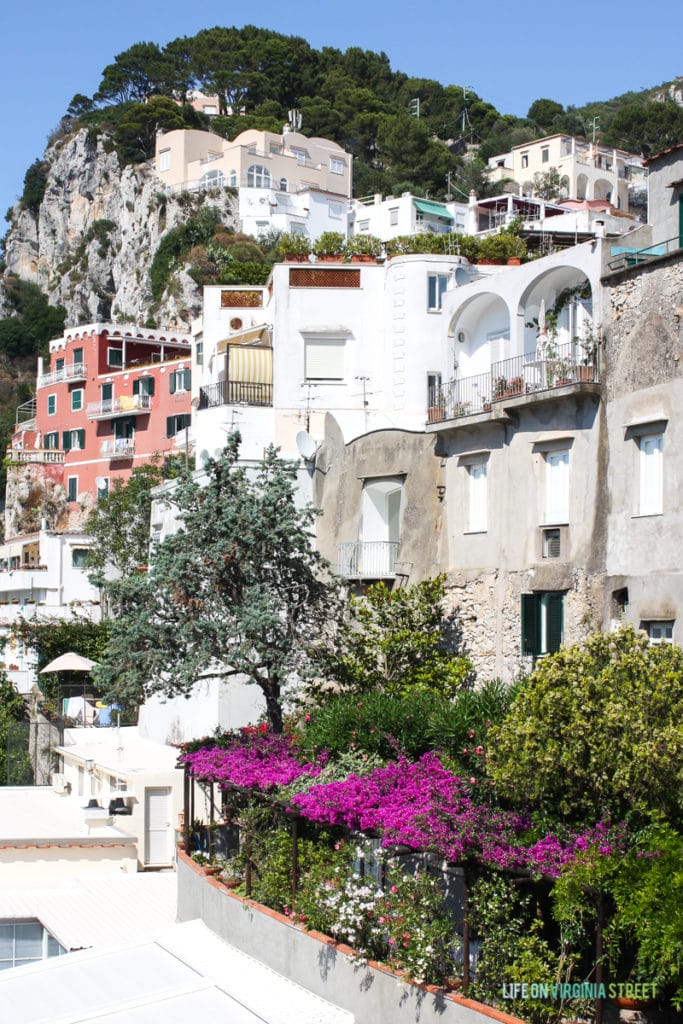 Next stop Rome.  Are you beginning to see why this trip was so exhausting?!?  We seriously thought the days could not get any better than this one, but like I said, this was a three-way tie for first place.  Italy could not be any more perfect!

Check in tomorrow for our day in Rome and Vatican City.

To see the full trip be sure to check out any of the days on our trip by clicking the links below: