This is a continuation of my travel series covering our Mediterranean cruise in July of 2010. See my Mediterranean Cruise Day 1 post for the introduction and the end of the post for links to each port of call on the cruise. Today focuses on our day in port of call Civitavecchia. We took an excursion with the cruise line and visited Rome and The Vatican. I’ll be outlining the highlights below.

Day 6 Highlights:
I may need some extra energy for this post.  Rome was by far the most exhausting day but also one of the best.  In my mind, I expected to like this day least, although knowing it would likely be my husband’s favorite.  Again, he loves history and I could take it or leave it.  However, similar to Pompeii, I was blown away.  Everywhere you look you are seeing things unlike anything in the U.S.  The rich history of this area is just mind boggling.  We have affectionately called Italy “sensory overload.”  Every day there was just SO much to take in and it was all SO different.
We started the morning off with a visit to the Colosseum.  I was definitely not expecting to be so impressed.  It is much larger than I expected and it is amazing how much of it remains {even though the Romans used it as a marble quarry for several years and it was partially destroyed by an earthquake}.  The best part of being part of the excursion, we got to bypass the several hour line to get inside! 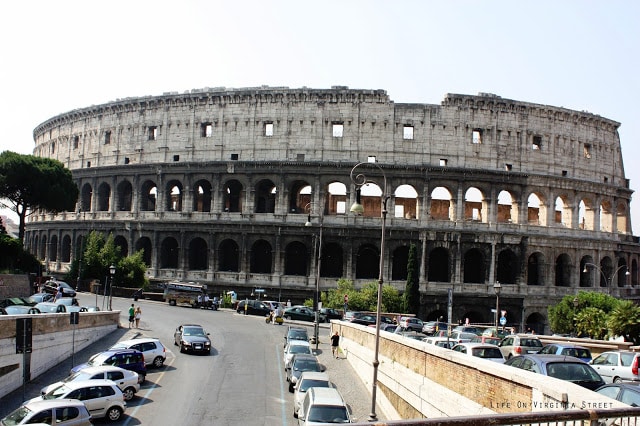 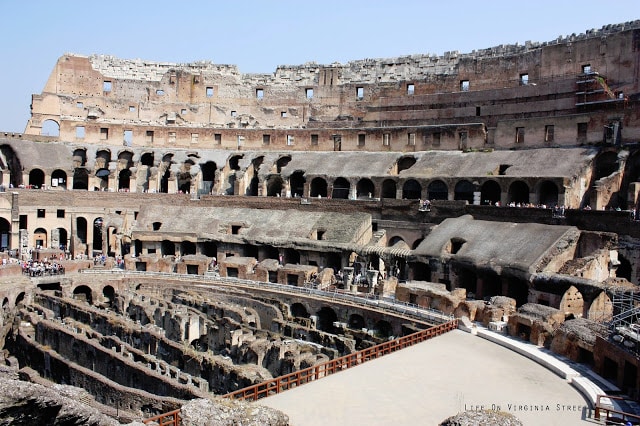 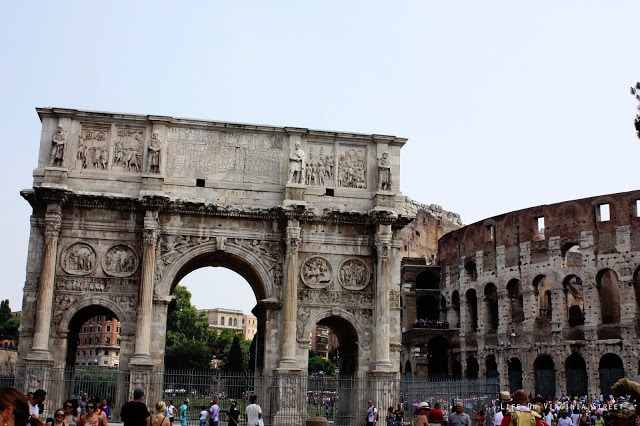 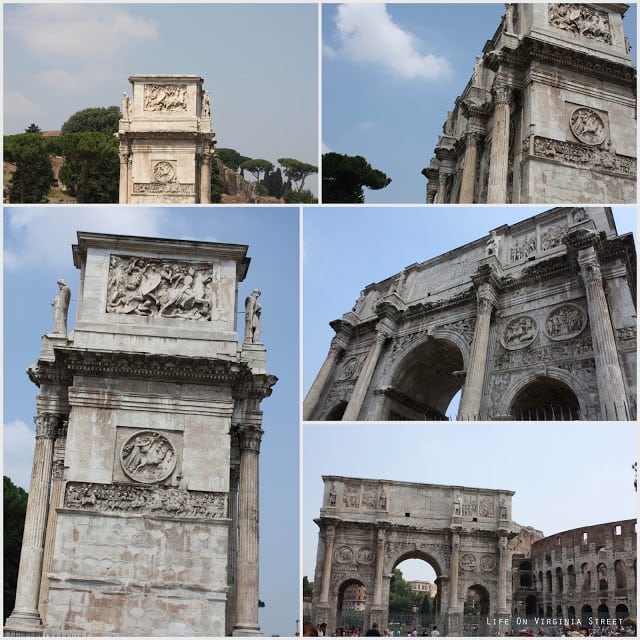 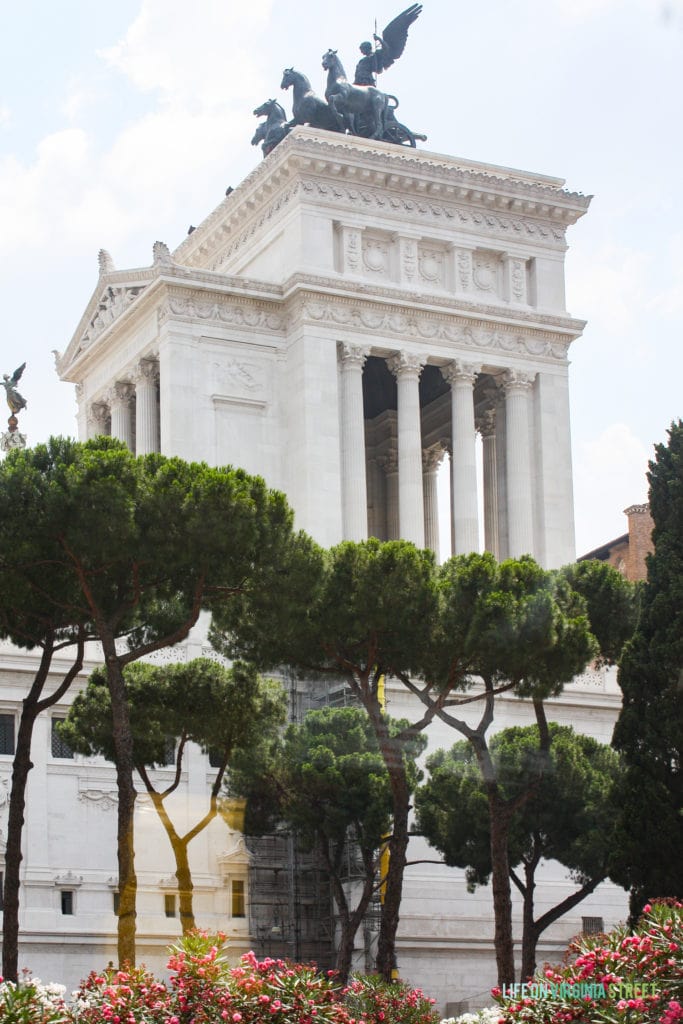 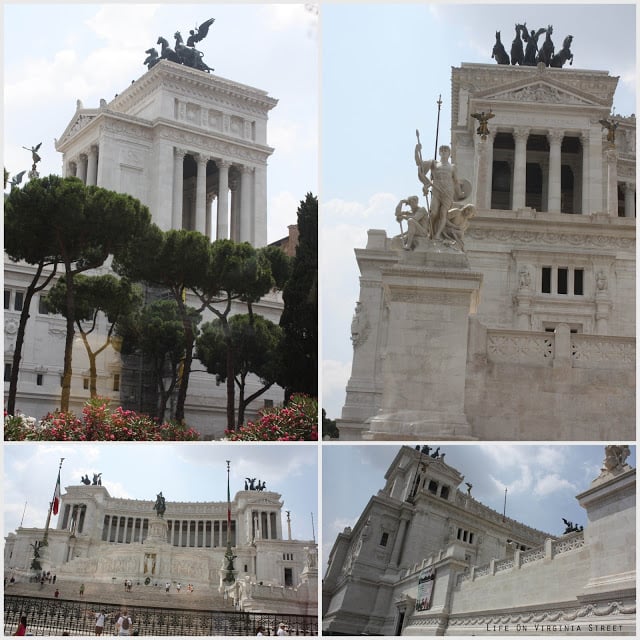 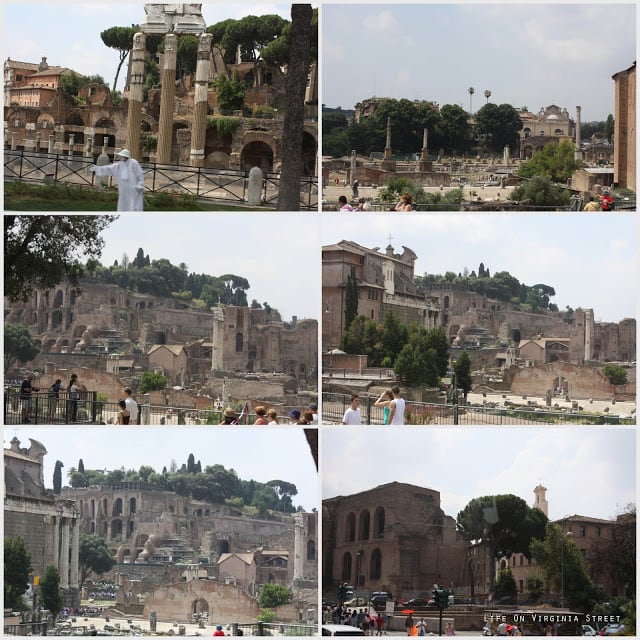 The beautiful buildings we passed on our stroll to Trevi Fountain. 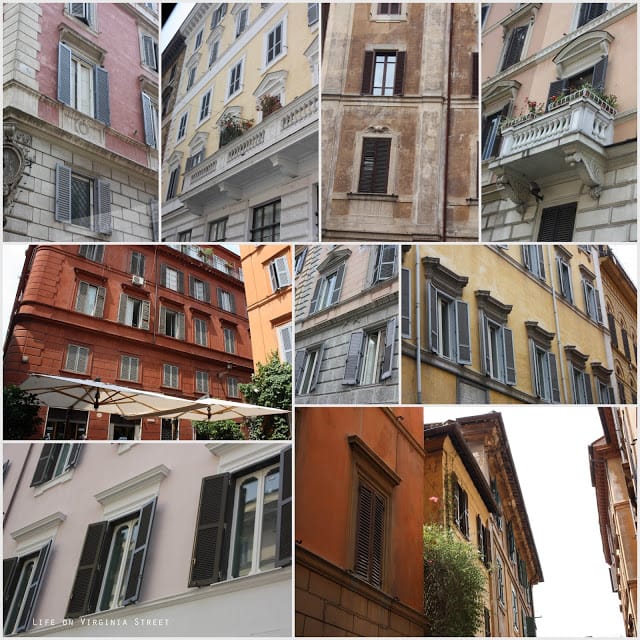 Trevi Fountain – aka the craziest tourist site I have EVER seen.  We are talking wall to wall crazy people.  Trevi Fountain really was beautiful but the crowds were REALLY starting to annoy me.  Thankfully, we were only there for about 20 minutes.  We both threw our coins in {the proper way – backwards over our left shoulders with our right hands} to ensure a return visit to Rome! 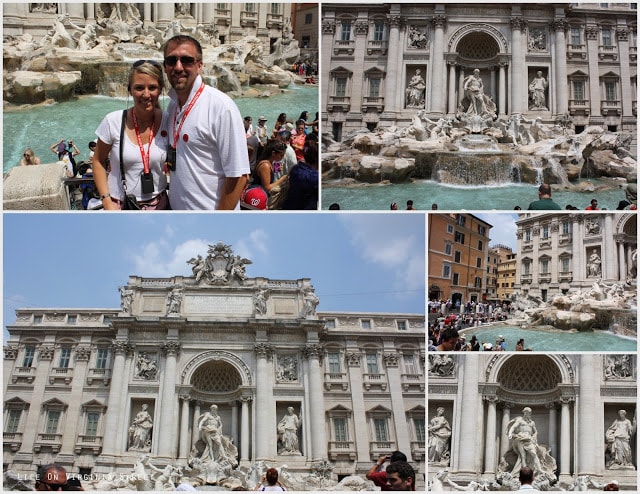 Our walk from Trevi Fountain to Hotel Savoy for lunch.  I love the little glass encased restaurants along the sidewalk.  There are two shown in this collage. 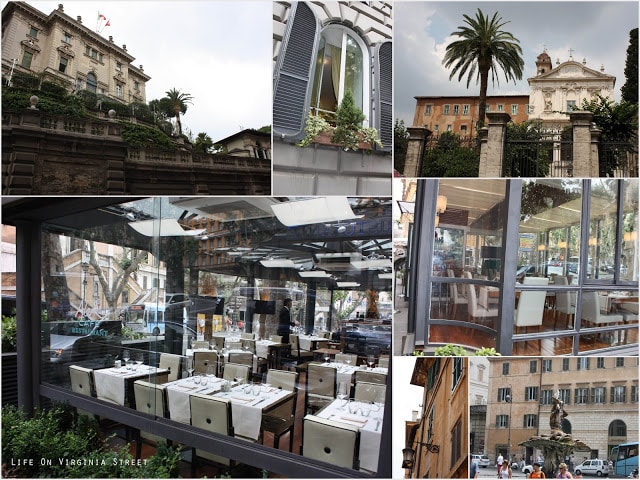 We had lunch on the top floor of Hotel Savoy and dined with two Norwegian couples.  One of the women was Dutch {from Holland originally} and told me they have a famous television star in Holland with the last name DeGooyer {my maiden name}.  Both couples were a lot of fun to talk to and it is always interesting to get other viewpoints on Americans and how citizens of other countries view us. 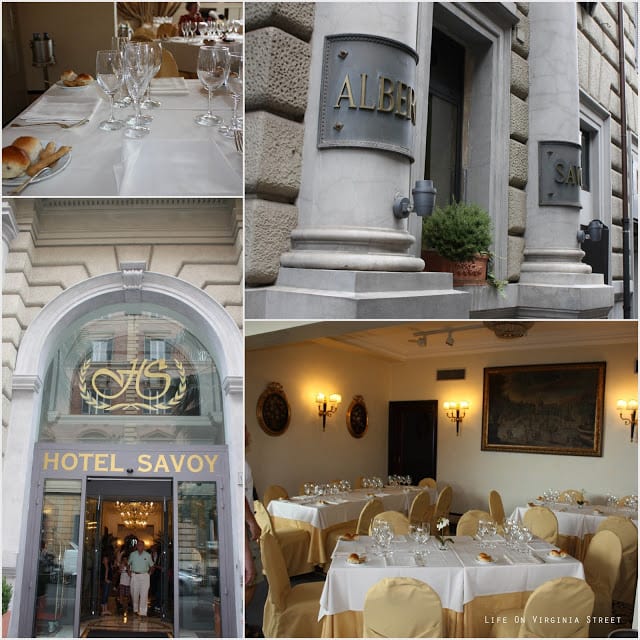 After lunch we went to Vatican City.  Hence the reason we are wearing pants and short sleeve shirts.  Your shoulders and knees must be fully covered while inside.  We are not Catholic but this is still such an amazing place to visit.  I was completely shocked at the volume of art/sculptures/paintings/tapestries that the Vatican owns.  Again, this was 100% sensory overload.  Between the thousands of tourists {they average 25,000 visitors per day} and the thousands of pieces of art it was REALLY overwhelming.  We also got to visit the Sistine Chapel while in the Vatican, which personally, for me was a letdown.  There are no photos allowed and it is just a wing off of the museum.  I guess I always thought it was a stand alone building.  It was also cool to say we visited another country while in the walls of Vatican City. 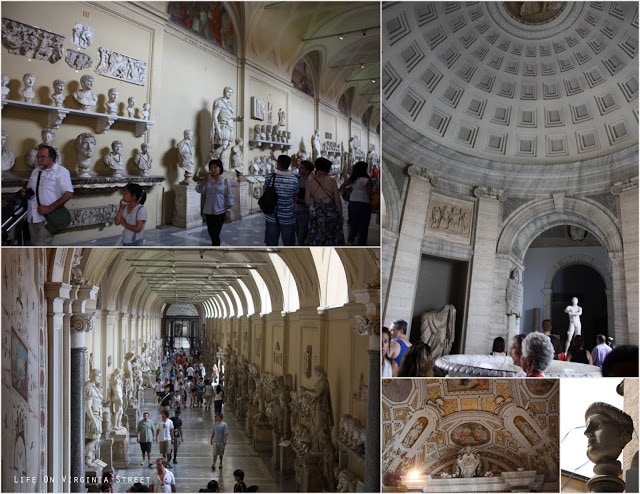 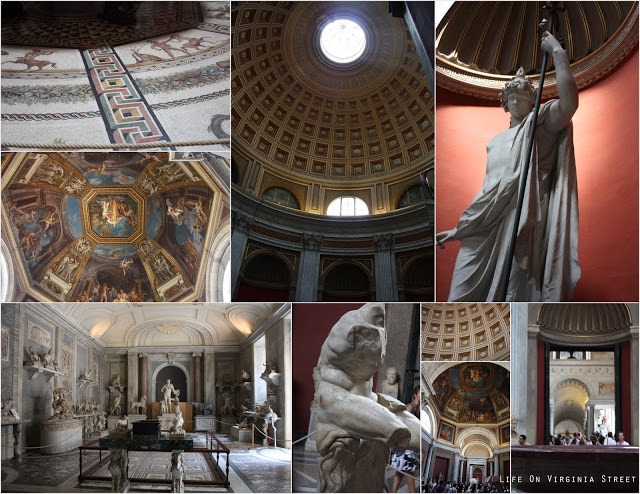 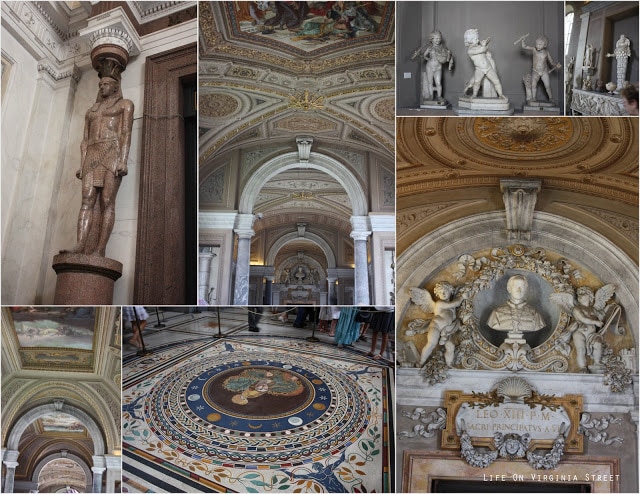 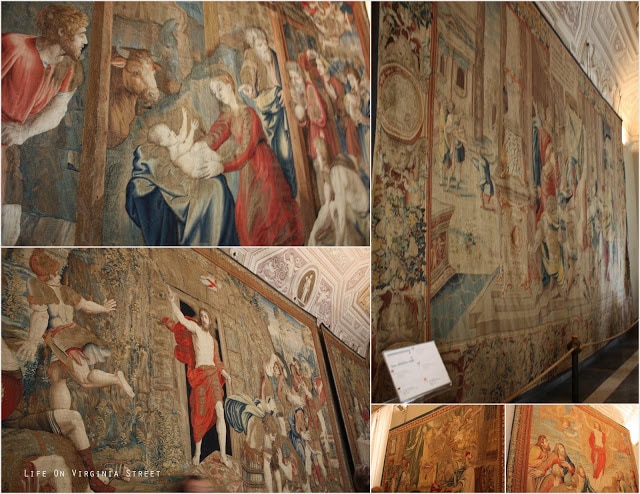 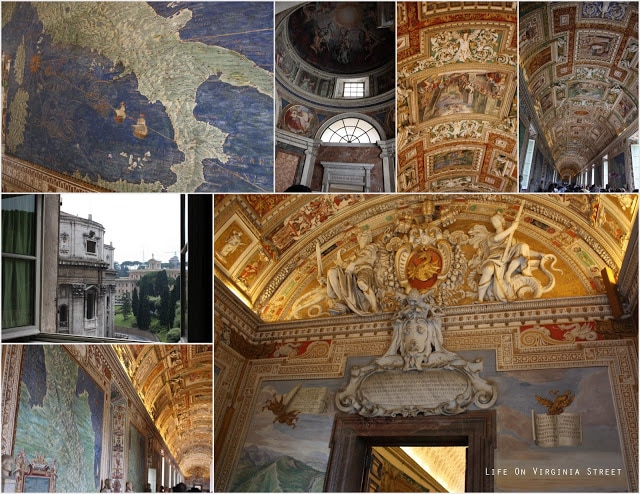 St. Peter’s Basilica {still inside the Vatican} is the world’s largest church.  I found this much more impressive than the Sistine Chapel.  We went at the perfect time because the sun was shining through some of the windows creating a really majestic look in the basilica.  Its hard to believe this is where the Pope stands. 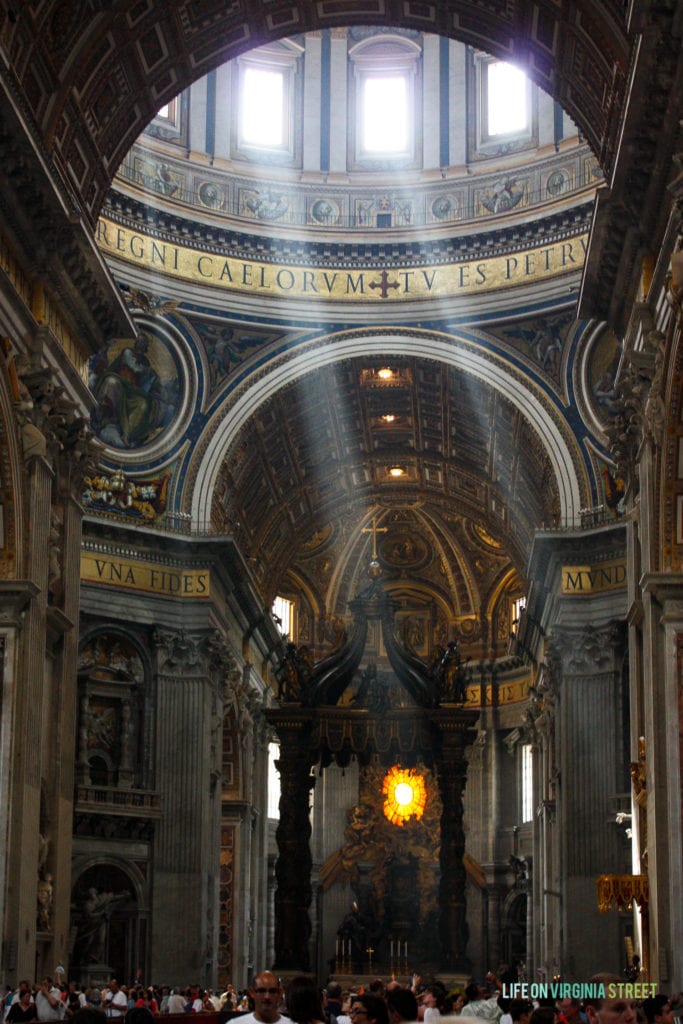 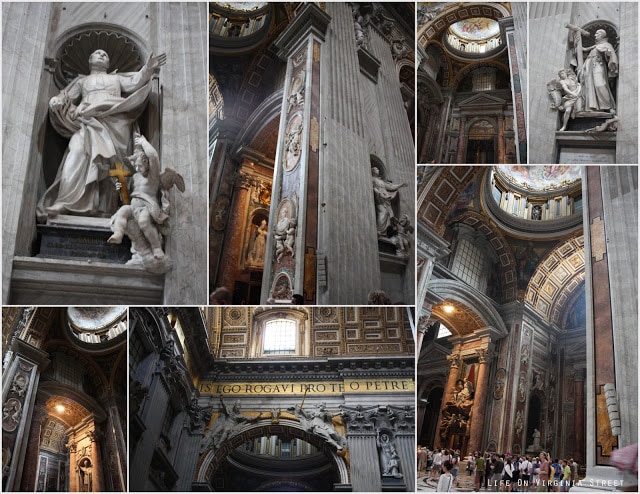 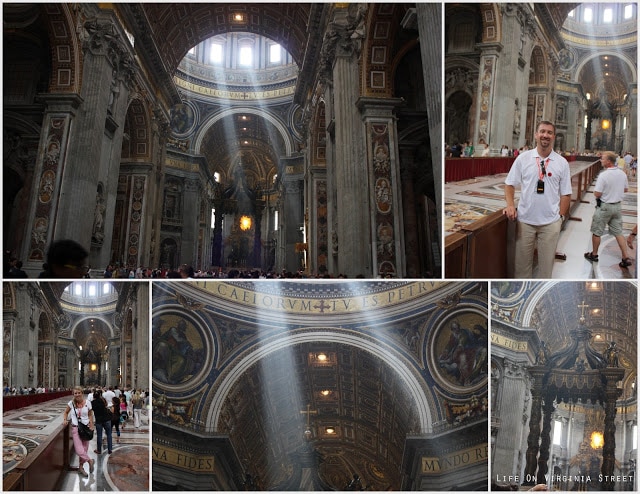 Just outside the doors of St. Peter’s Basilica is the impressive St. Peter’s Square.  This place is massive and is just unlike anything I have seen before. We also got to see the Swiss Guard. 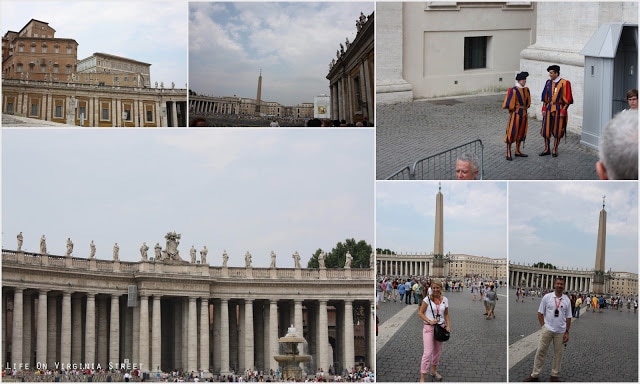 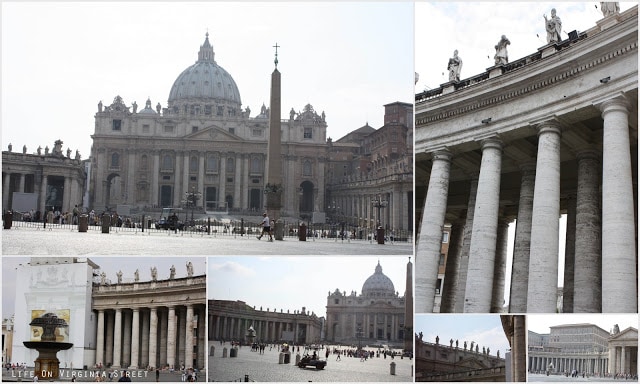 Thus ends the tour of Rome and Vatican City.  So hard to believe we fit all of this into one day!  Needless to say we slept the majority of the bus ride home.
We really bonded with our dinner table mates this particular night.  Royal Caribbean randomly matches who you sit with for dinner for the entire trip.  I must say they did an excellent job matching us with our group.  We had SO much fun with these guys and they really made our trip that much more enjoyable!  It was funny how reserved we all were the first night but after the next two nights, everyone pretty much said whatever was on their mind.  They were all so much fun.
Next stop, Livorno, Italy to visit Tuscany!
8 shares