I am sharing with you today all the eyesore removals that I managed to knock off my list! 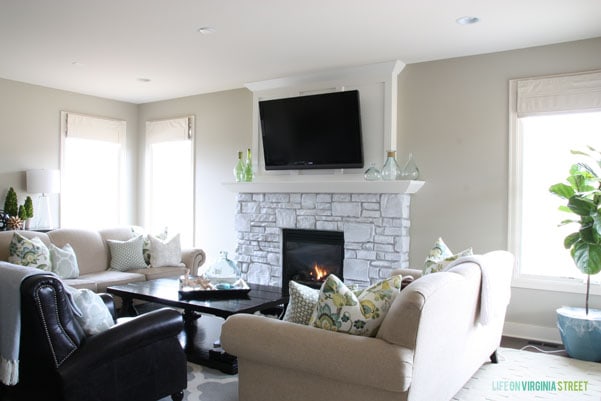 I hope you all had a great weekend! Although the title of the post sounds like I’m talking about surgery, today I’m going to share some fun {to me} changes that have taken place around here lately. We returned home from a tropical trip late Wednesday night, I went to work Thursday, and by that evening I was really sick. The perils of travel. In fact I was sick most of the weekend, so I didn’t get to wrap up my painting yet for the January Year of Change project reveal on Friday. However, we were able to make some really simple changes and remove some eyesores that have been on our mind lately {or since we move in}.

First up. This has only been talked about for over two years, but we finally took down our ceiling fan in our living room – even though we still haven’t found a replacement. I have a major aversion towards ceiling fans, and recently, one of our cats has really been freaked out by this one. In our last house he literally almost had a heart attack one day while it was on in our bonus room – he ran around in circles, crashed into things, etc. all while staring at it and going crazy. Long story short, we have never been able to turn on a fan since! After he had surgery the first of this month, his fear of the fan has returned – even when the fan is off. We’re blaming the cone he still has to wear, as it limits his sight. Ultimately, we decided to take it down for his sake {or so I say} without a replacement. But already, the space feels so much more open and it’s like a dark cloud has been removed from overhead. A little dramatic, but mostly true 😉

If you look closely, you’ll see the plastic cap on the ceiling that hides the light box. Now that I see the space without anything on the ceiling, I actually really like it – especially given that we don’t actually need additional lighting in the room.  A new light would likely just block the view of the TV, which, if your house is anything like mine, is completely unacceptable. Just for fun, here’s a look back on just how far we’ve come. Here are some before pictures – before we moved in and then after some changes but before I had painted the fireplace stone. 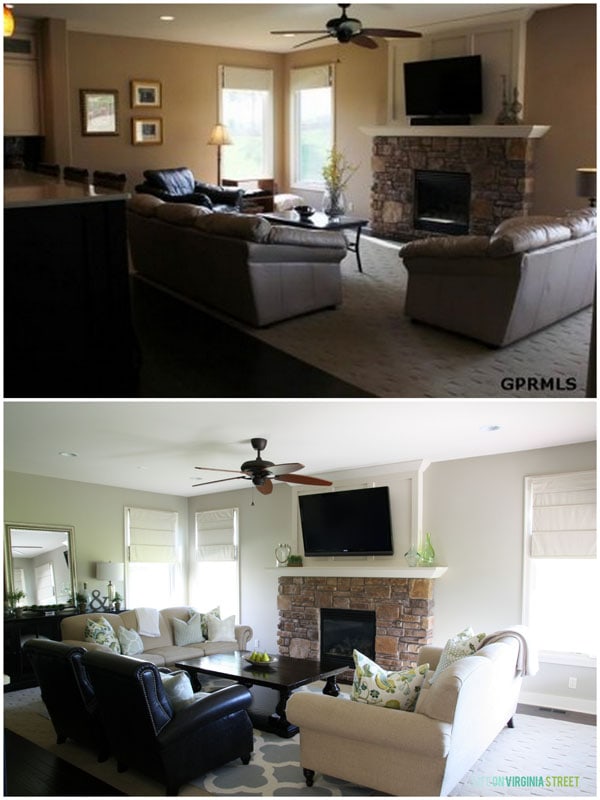 See how the ceiling fan just added to the other dark elements? The room already feels less cramped and so much brighter! The end result one more time, just because I love the dramatic change:

Next up, we removed another eyesore temporarily to test it out. If you remember back last year when we talked about updating our kitchen {the current state and what we want to change here and the plans here}, one of the things that bothered us, but we weren’t sure how to fix, was the situation with the microwave. It feels like an afterthought in our kitchen. It has a shelf jutting out from the kitchen cabinets to hold it and then there is just empty space around it. If we’re going to invest in our kitchen we knew this problem had to be solved. 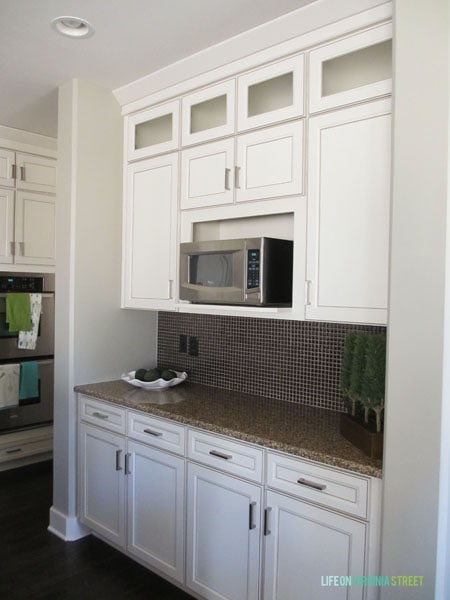 We were talking a few weeks back that that problem could easily be remedied by simply relocating the microwave and removing the shelf. We did some measurements and found that we could basically remove the middle section of cabinet entirely {from the shelf up to the top of the small solid doors} and insert a full set of cabinets, or we could simply buy full-sized doors and remove the upper ones.

Here’s how it looks now with the microwave removed. The picture is incredibly blurry and crooked {even though I had it on a tripod?} I’m blaming the sickness. 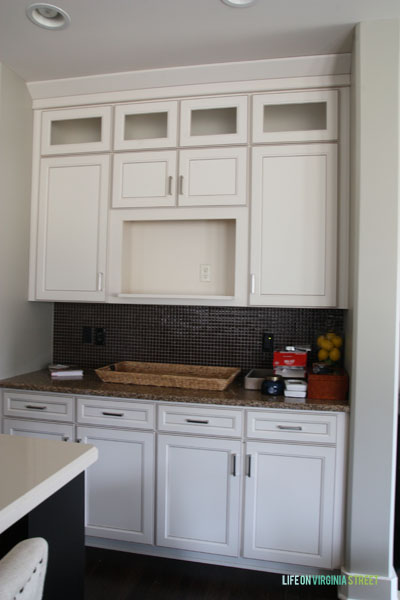 Already, I can fell how much lighter and brighter the space is – minus all the junk on the countertops. The microwave removal also proves even further how cream/pink our cabinets are since the microwave box is inset and has a slight shadow. The color is coming on strong! We’ll plan to live with our microwave in the pantry for a month or two to see how we like it and if it functions well. If so, we’ll plan to order to full-size cabinet doors to replace over this area. Does anyone know from a resale perspective if this is a bad idea?

I’m just happy these changes have already made a big visual impact for us – and they were free!

In case you missed my announcement Friday, I am having a flash fabric sale on all my designer fabrics in stock. You can read more about it here.

If you would like to follow along on more of my home decor, DIY, lifestyle and other posts, I’d love to have you follow me on any of the following: