This week I completed some tasks of repairs, chairs, and the bear (cat)!

Friday was my day off work, so I took advantage of the longer weekend and completed some tasks I have avoided for awhile.  First up, I painted the stairwell to the basement.  It was still the old color plus I had primed the new drywall several weeks ago {after my dad fell there}.  Here’s the before and afters.  They pretty much look identical {except for the primed patch} but when you see the in progress {or in real life} you can definitely notice the subtle paint color difference.  Old paint = Benjamin Moore’s Rattan.  The ‘new’ paint = Behr’s Nile Sand which is in our main living areas as well as the bonus room.  You would never know the hole that was there just a few short months ago! 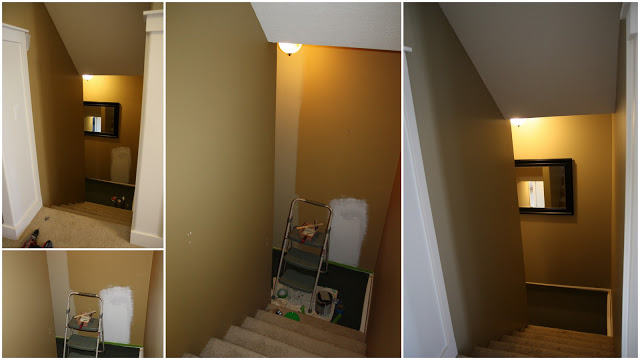 Next up I sold our old dining set as well as our old chairs {last seen clashing here}.  Its such a great feeling to get rid of stuff you no longer have a use for but get a fair price for and see it go to a good, new home.  Thank you Craig’s List!

I had ordered wing back chairs shortly after this post.  From Sears – of all places – and they arrived Friday at the store for us to pick up.  I had seen them in the blogging world for a few years {they are actually a Land’s End product} and just couldn’t argue with the low price – and six times SkyMiles!  I am in LOVE! 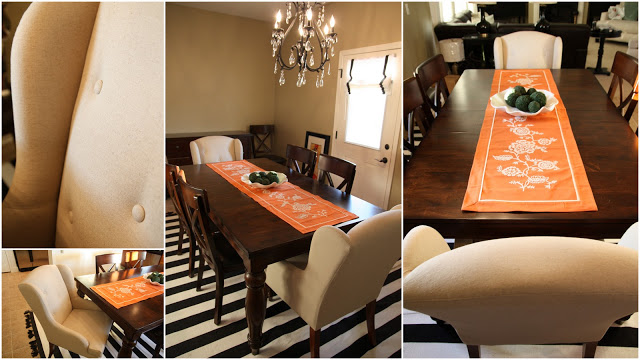 And lastly, we can’t go a year without documenting Bearcat’s love of Halloween.  He is in constant motion so a good photo is hard to get.  He is such a good sport and will let me dress him in whatever I want if he gets to go outside and eat his beloved grass.  This year I found a cool “leather” motorcycle jacket we bought in years past.  It wouldn’t buckle over his biker’s gut, but that just helped him stay in biker character.  And can you believe my knockout roses were still blooming and had new buds at Halloween?  Bearcat loved greeting the trick-or-treaters until we ran out of candy at 8:00 pm.  Its definitely his favorite day of the year!  One things for sure – he is the cutest little biker dude I have ever seen! 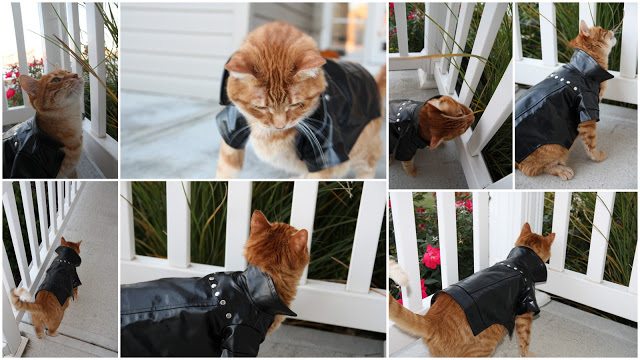 Today we furthered our research on hardwood floors {a continuous journey for the past two years}.  We really are torn but the more time that goes by, we are convinced more and more that hardwood is the best fit for our house {and mostly the cats}.  Here’s a phone shot of the front runner – mostly due to how cheap it is.  Its an oak but stained rather dark {darker than the photos suggest} – and has some good texture – in 5″ handscraped planks.  Do you like it?  I am really having a hard time committing to one and I need some other opinions. 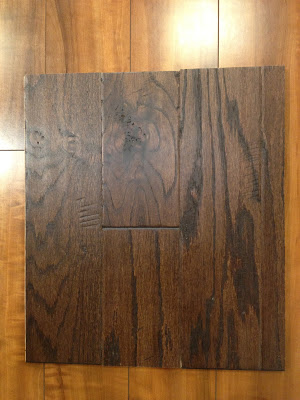 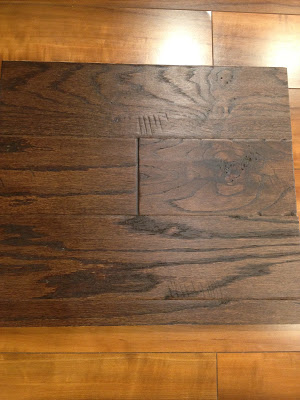 After researching so hard, we had worked up a serious appetite and sought out a new restaurant in Askarben Village.  We decided to try Mojo, a local smokehouse and pub.  We had the sliders which allowed us to try three types of smoked meat and they were ALL amazing.  We will definitely be going back!