Henley has had a red bump on her lip/upper chin for the past week and it just wasn’t going away.  It is more obvious after she is running around {it gets puffier and redder} but then will calm down to a more subtle pink.  Today I took her to the vet after giving them a call for advice.  Turns out she has chin edema {she had it one other time but it went away on its own}.  After a quick injection she was good as new.  If it happens again, they may have to change her diet, as it is typically related to a food allergy and she would have to switch to a grain free food.
Embarrassing moment:  the vet asked if her food was still the Science Diet Light.  How do you break it to your vet that your cat also eats guacamole, bread, Butterfingers, tortilla chips, chips + dip, Famous Dave’s cornbread muffins, vegetables, filet mignon, salmon, halibut, buttered popcorn, chicken McNuggets, buffalo wings, Sheridan’s frozen custard, hamburgers, brats, greek yogurt, Cheerios, beef jerky, edamame, wheat thins, cottage cheese, soup, Girl Scout Cookies, etc. etc.  Heck, this cat eats better than most humans living on the planet!  However, I just mentioned she gets food scraps daily – no point letting her know this cat lives like royalty.  The vet assured me that they wouldn’t be the issue anyways – it sounds like there is inferior grains being used in a lot of cat food and it is starting to become a common problem.  Problem is, the new food would be mostly protein and would be very high in calories and fat – good for Henley, bad for Bubba.
The good news out of all this is its nothing incurable and when we got home, my new lens {the Tamron 17-55mm lens} had arrived {a day early}!  I have learned a lot after four days in my photography “class” but still have a long ways to go.  However, I can already tell I LOVE my new lens.  I couldn’t be happier with the blurry backgrounds.  The husband doesn’t really get it but is just glad I love it.
Bear with me as I share some photos {in bad lighting but I couldn’t wait to take some}.  Unfortunately, the cats have proven to be horrible models and just won’t hold still.
Henley and her fat lip: 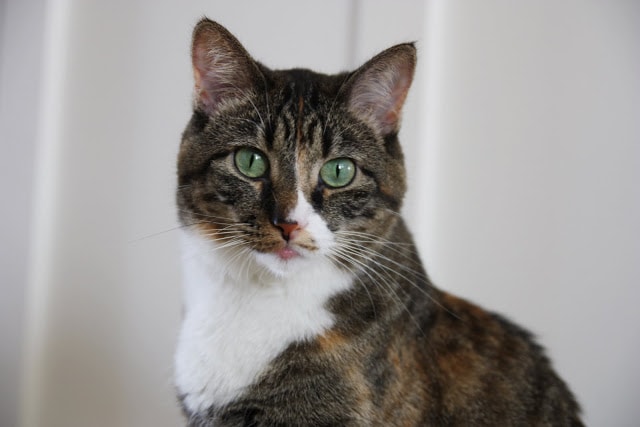 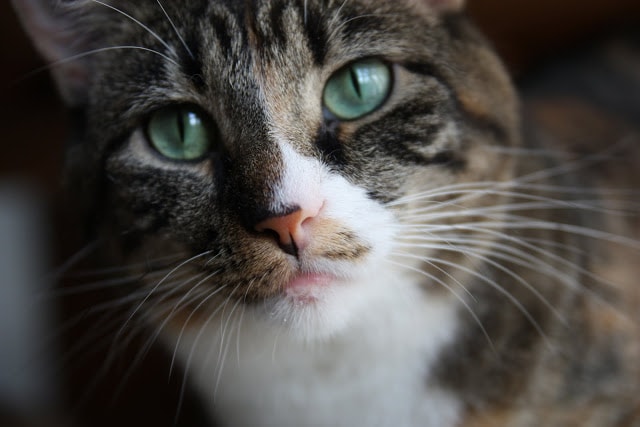 Bailey {I have a thousand other shots like this – the only place she will hold still is on the front porch, sniffing the fresh air}: 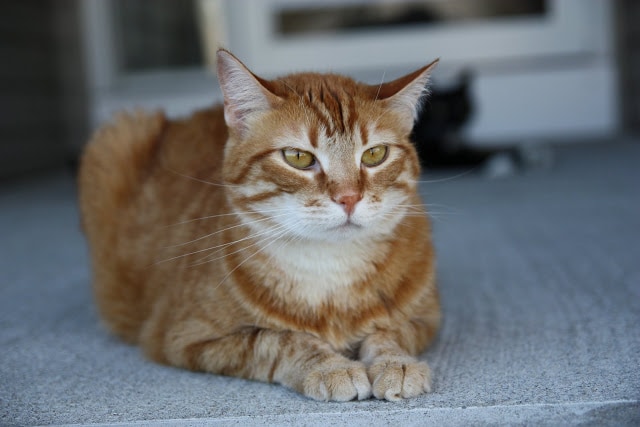 Is it me or does she totally looks like Puss’n’Boots in this one?  This is the face she gives me every night when I am on the computer and she wants me to pet her.  I look over at her and she is just staring at me: 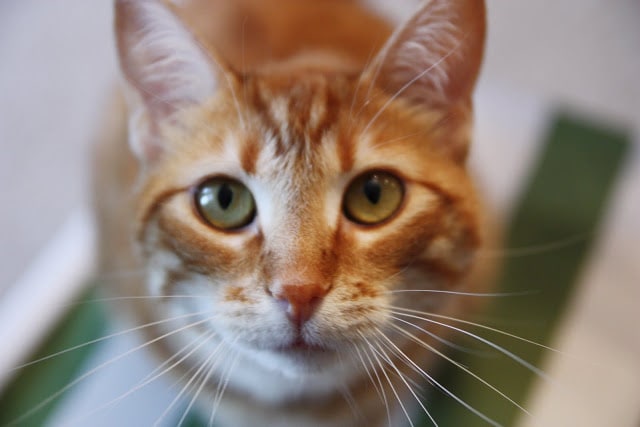 Bearcat {his only semi-focused photo – the second one shows what the other 99% looked like since he was constantly in motion today}: 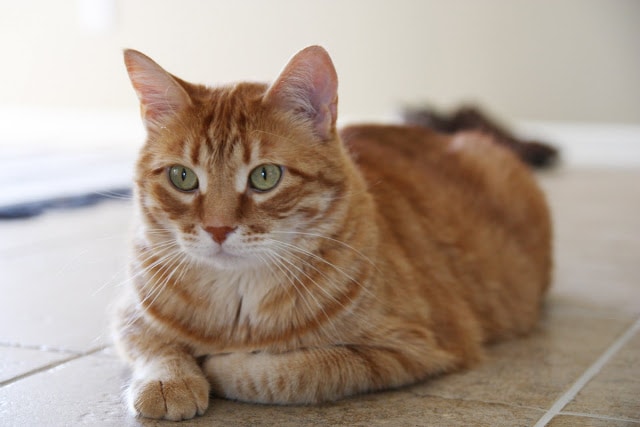 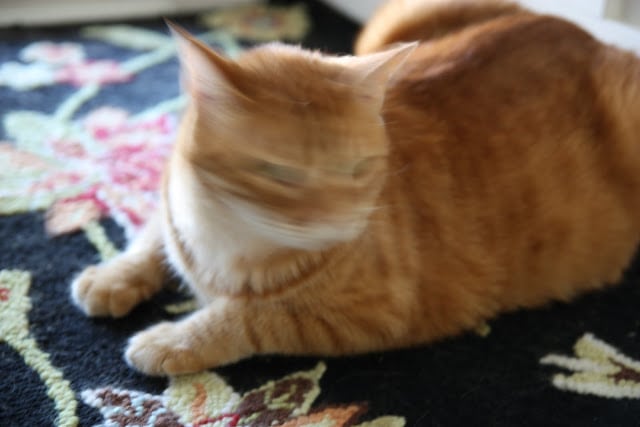 Hawkeye {he really doesn’t have dandruff – he had just come in from the front porch and had been rolling around on the filthy rug}: 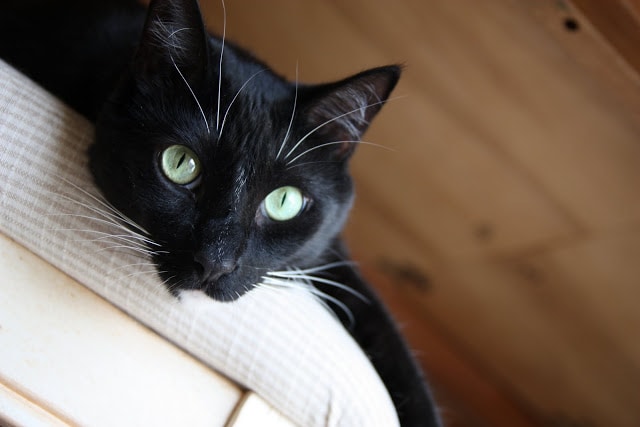 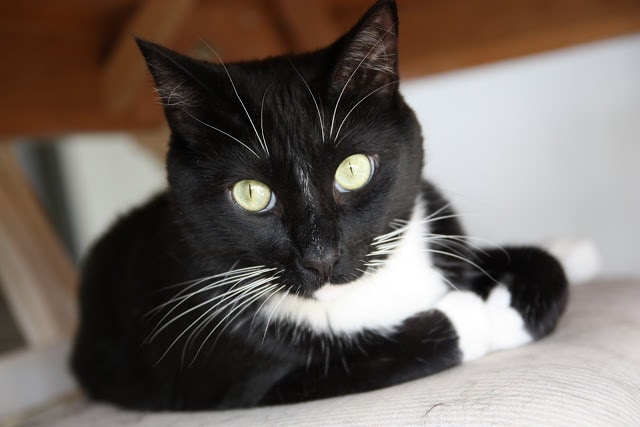 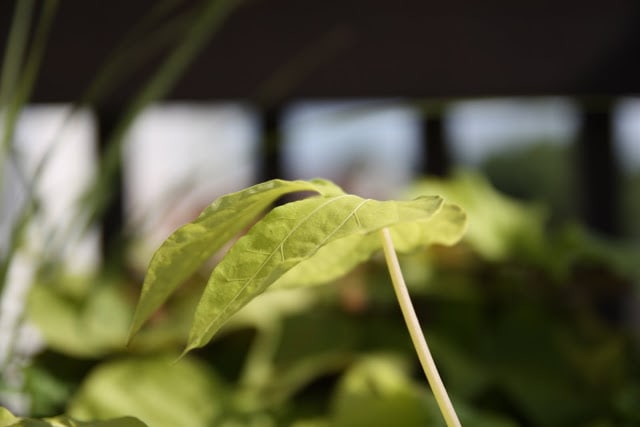 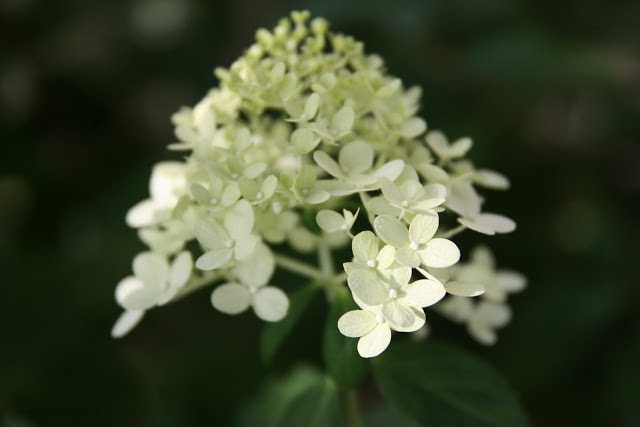 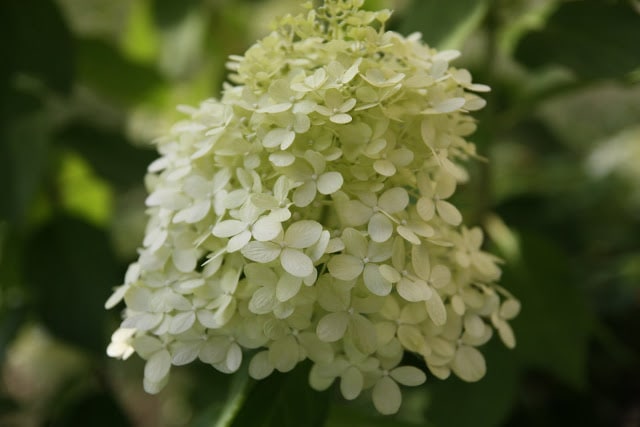