As I mentioned, we had some long-needed updates to our yard completed last week and our long-standing frustration with our backyard is starting to be alleviated! Remember this summer what a trainwreck our back lot-line had turned into? Weeds, weeds, and more weeds. We couldn’t keep up with it. 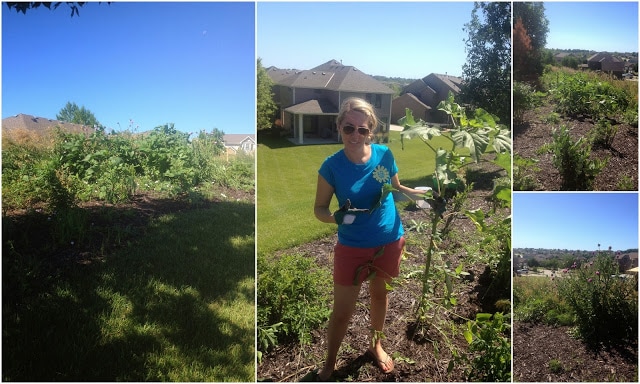 As much as we love a DIY project, we knew that based upon the scope of this project, we would need to bring in the professionals. And although it seems like an odd time of year to get landscaping work done, we actually found the company was more willing to negotiate on prices {and they still offered their guarantees on the plants even though we won’t know until spring that they are still alive}. It’s also the best time of year to lay sod from what we’ve heard.

The bulk of the changes took place in our backyard. We had all the weeds torn out, all the old mulch removed, had the top of the hill graded and then prepped for sod and all the sprinkler heads moved back to cover our full yard {they previously stopped on the grass line so the top of the hill wasn’t getting water}. With the fact that we have three full lots behind us {two of which are empty and the third that was just built upon} we could not keep the weeds under control. We decided to do some simple tree-rings with mulch and only have one large bed and at the far side of the lot where the hill is much less steep. I think of this section of the project as reverse landscaping.

In this photo you can see the areas with the fresh mulch {the area in the left half as well as around all of the tree into the distance}. Those areas will remain mulched, but all of the dirt will be covered in sod, {hopefully} eliminating the weed problems. The sod should arrive and be completed this week. It’s hard to believe but the photo below is the same angle as the fist photo above. Yeah, they had some weeds to deal with :/ 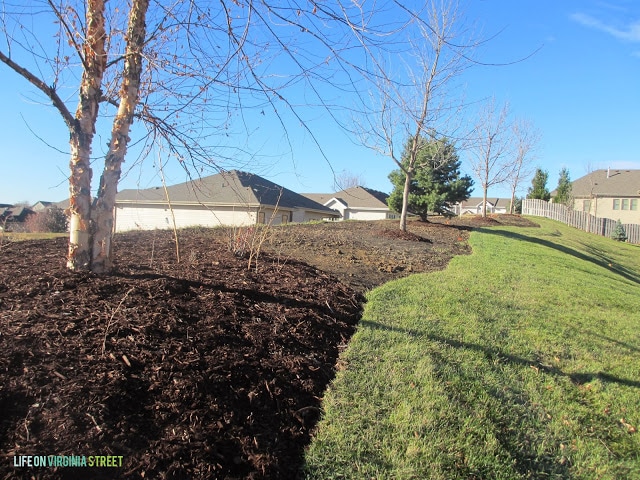 This photo really shows the length of the area we’re talking about – our yard doesn’t end until the pine tree in the far distance by the first house you see on the left. And the dirt below is about 10 feet wide in most places. Clearly much more than a weekend DIY project. The sod you see to the right is from the house that just got finished behind us. Apparently their sod layers struggled with making a straight line? You can then see the other two empty lots {the one builder the furthest out at least mows the empty lot to keep the weeds under control}. 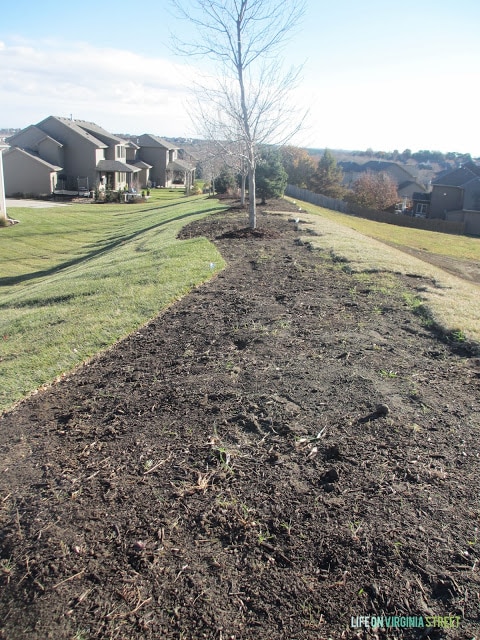 Here’s the one large bed that will remain. You can see a light trench line where the sod will be laid this week. Earlier this year, we had planted some ornamental grass around the electrical boxes you can see. We’re hoping in a year or two they will be much larger and help camo the eyesore. 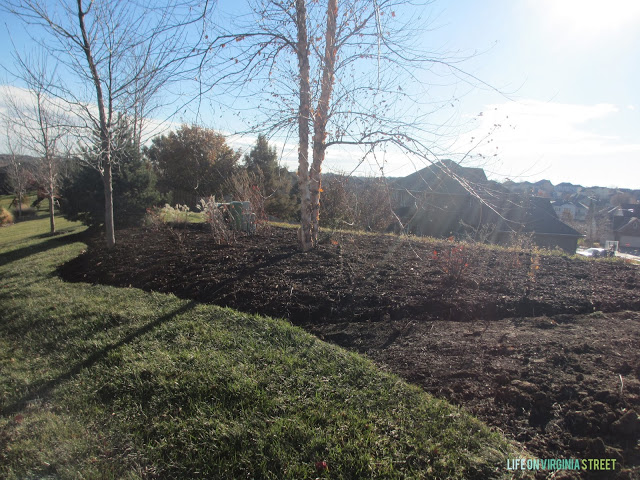 Here you can see the large triangle shape of our backyard. Our front yard is tiny {since we’re on a rounded street} but that plays into why we are three lots wide in the back. We have some pretty dream-like long-term plans for the backyard {maybe I’ll share the drawing one day}, but we feel like this project helps make the yard much more manageable for the next five years or so until we have funds to make other changes. 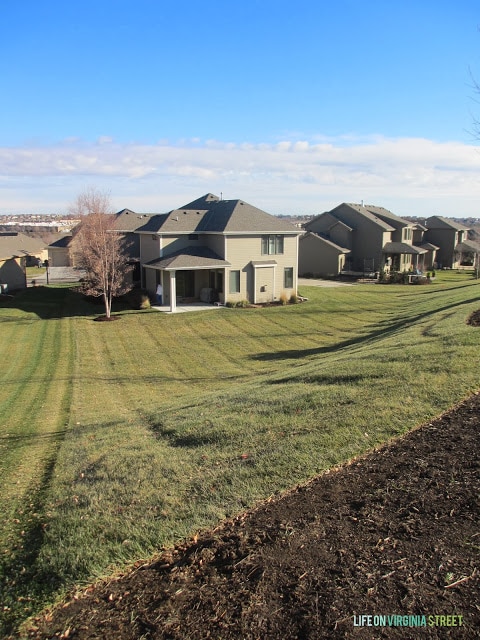 We also had the plants cleaned up around the perimeter of our home and had some torn out and others planted. I have never been a fan of the spirea that were used all around our home so I had those torn out {you may remember I removed five on my own back in June, but I would guess another 20 or some plants remained around the yard and were all torn out}.

In the back along our home, we had the spirea ripped out, added some flagstone to get to the water faucet and added one knock-out rose for some color. 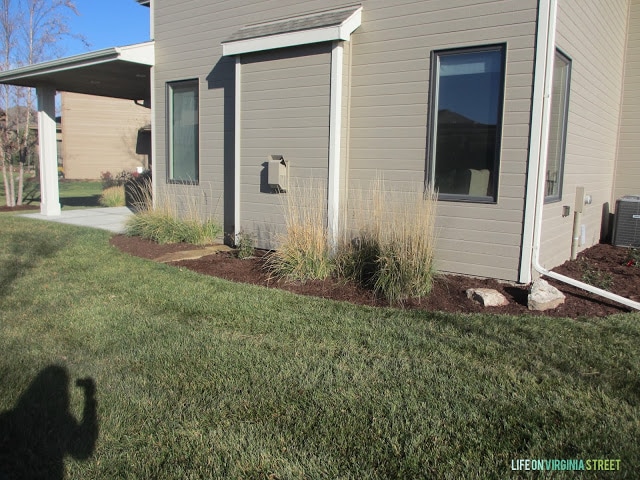 As we head around to the side of the house {and the right-hand side of the photo above}, you can see some additional changes. My husband had ripped out all the strawberry and raspberry bushes earlier in the summer. The photo below shows his progress after he ripped out the raspberry bushes {which had basically taken over the air conditioners} and prior to tearing out the strawberry bushes. When we first moved in we thought it would be so fun to have our own fruit. Wrong. That stuff spreads like wildfire and is a magnet for birds and bugs. The second photo shows the expanded beds that stretch to the end of the driveway along with the new knock-out roses, lavender {one of the few plants I had transported from the hill}, and ornamental grass. 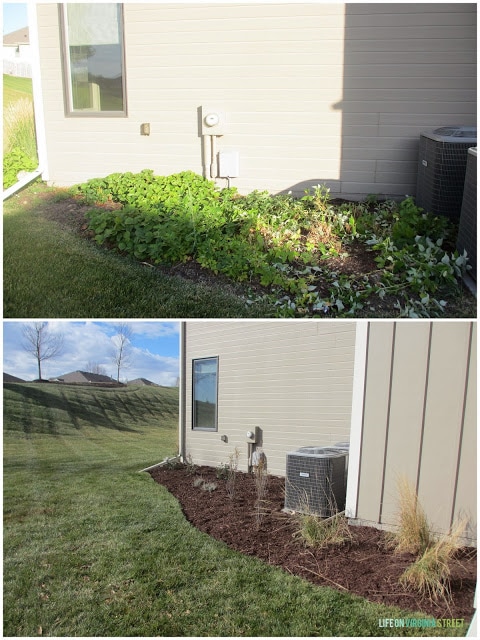 Here is an area that has probably seen the most drastic change over the past year. If you recall, we had our trees trimmed earlier this year. The first photo shows prior to the pruning, the next was after and the last is how it currently looks with the spirea and switch grass torn out and with fresh mulch, expanded beds and new hydrangea bushes. I’m most excited about all the hydrangeas that have been added. This side of our home faces north so it should be the perfect area for them to flourish. 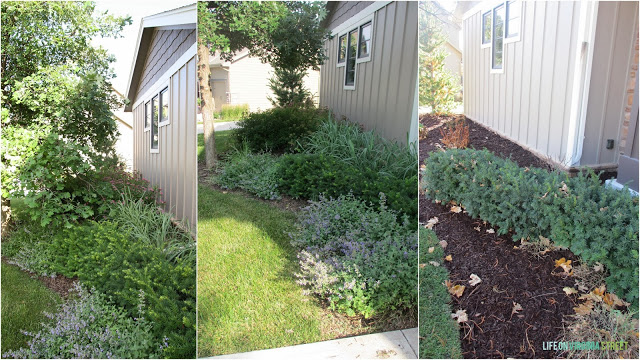 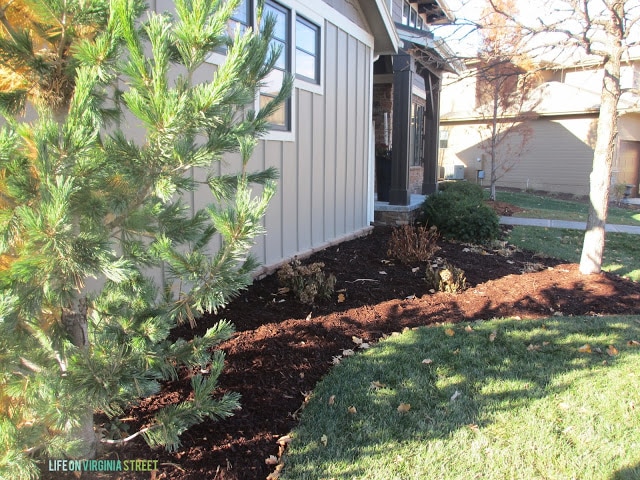 Again, here we had all the spirea removed. It looked amazing the day of, until the wind started an all the bald cypress needless fell in the mulch. But, it still looks SO much cleaner with the spirea gone. The switch grass was also removed from behind these yews {I liked the grass but felt it looked a bit too chaotic in the front yard} and hydrangea were added. The sedum are still in front of the tree but they trimmed them back for winter for us. 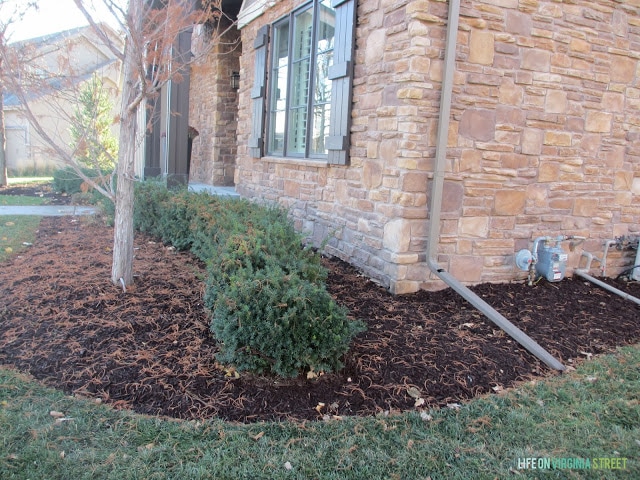 On the other side of the house {to the right of the photo above} the beds were freshened up, we had two honeysuckle plants added {to grow up the courtyard wall} and we pulled out some ornamental grass behind the knockouts roses, as the grass had gotten shorter than the roses in front of it. Another rose bush was added to fill that hole. I can’t wait until the honeysuckle starts to mature and we can smell it in the courtyard! 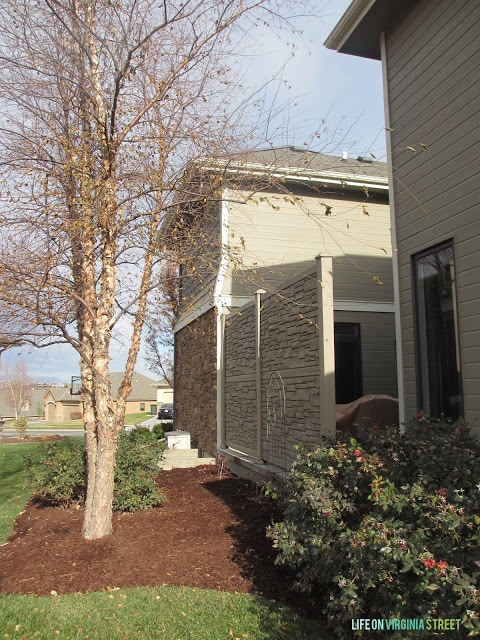 It all looks a bit barren at this point, but come spring, I can’t wait to see how it all looks in full color. This project just gives me one more thing to look forward to for spring’s arrival!