If you’re new around here and want to get caught up, you can check out these other posts about where we started and the progress we’ve made so far.

And thank you to all of you that chimed in on the drain situation last week. You were a huge help (in both terms of drain size and rock color selection)! My friend and neighbor, Jill R, sent me a text on Friday with the following image and it totally reaffirmed that I may need to go with a low contrast Mexican river rock. In my mind I felt like it would look okay, and this image makes me feel so much better about the idea. I’m still weighing each option but it’s nice to have a visual on both.

The pool excavation began Friday. Suddenly we felt like we were going to have a pool some day. The fact that today is already April makes it feel even more of a reality! 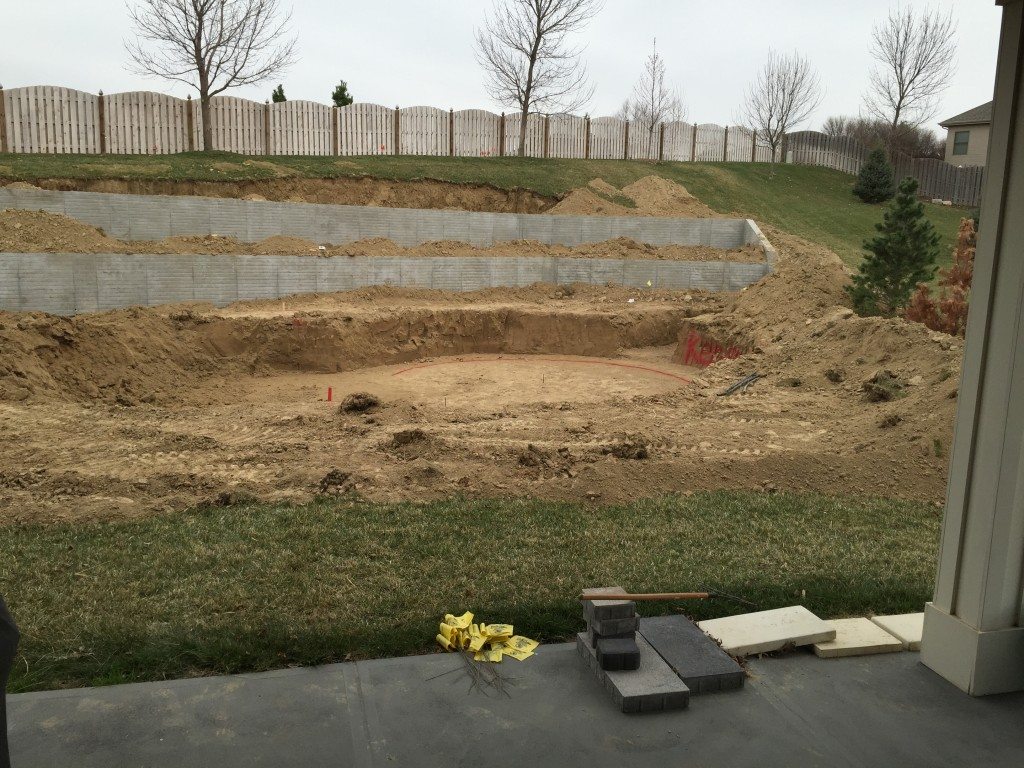 Due to rain on Saturday, they started back up again on Monday to dig the deep end. 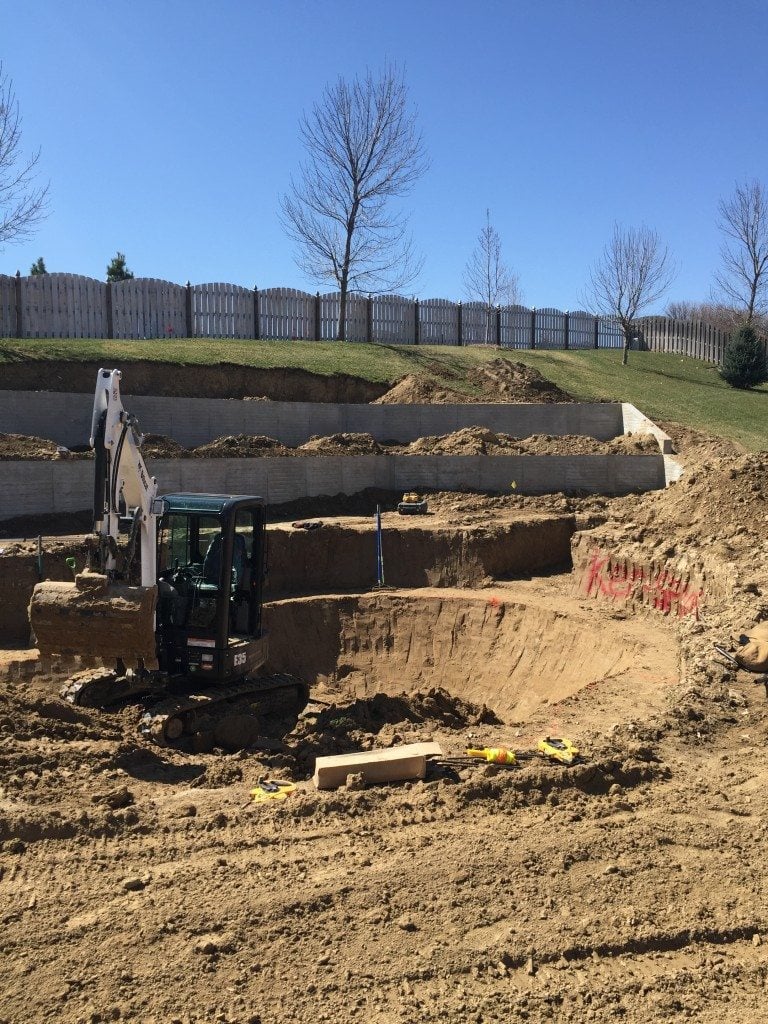 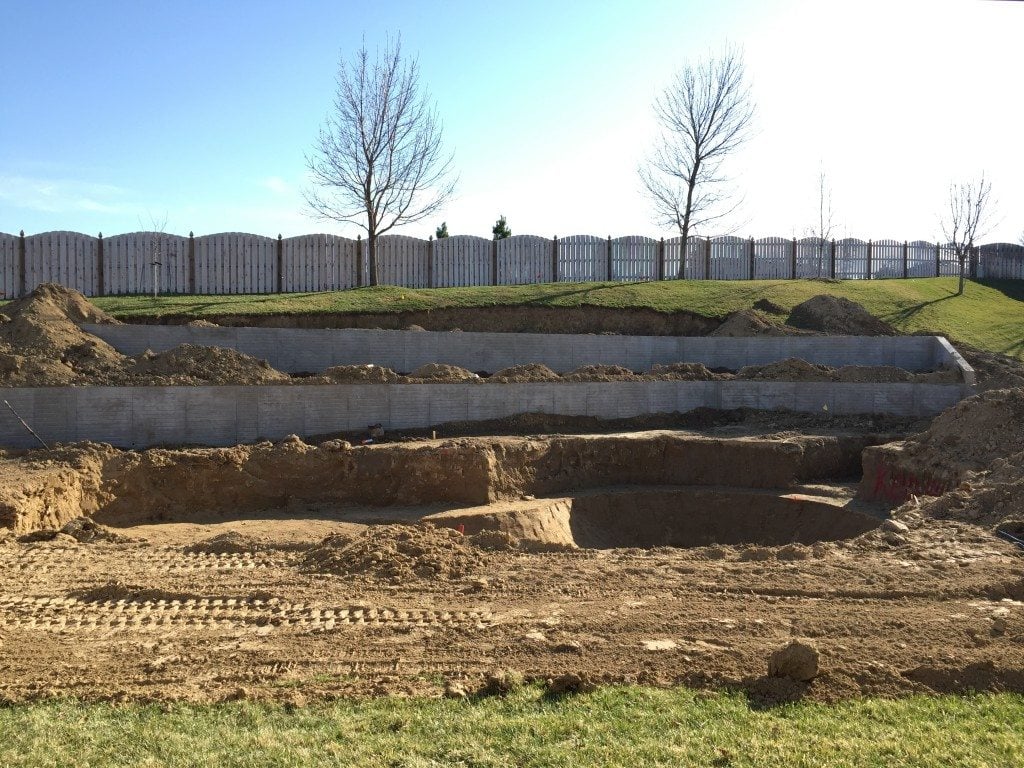 By Tuesday, they were already putting up the metal frame! Suddenly, our once ridiculously large retaining walls seemed dwarfed by the pool in the yard. 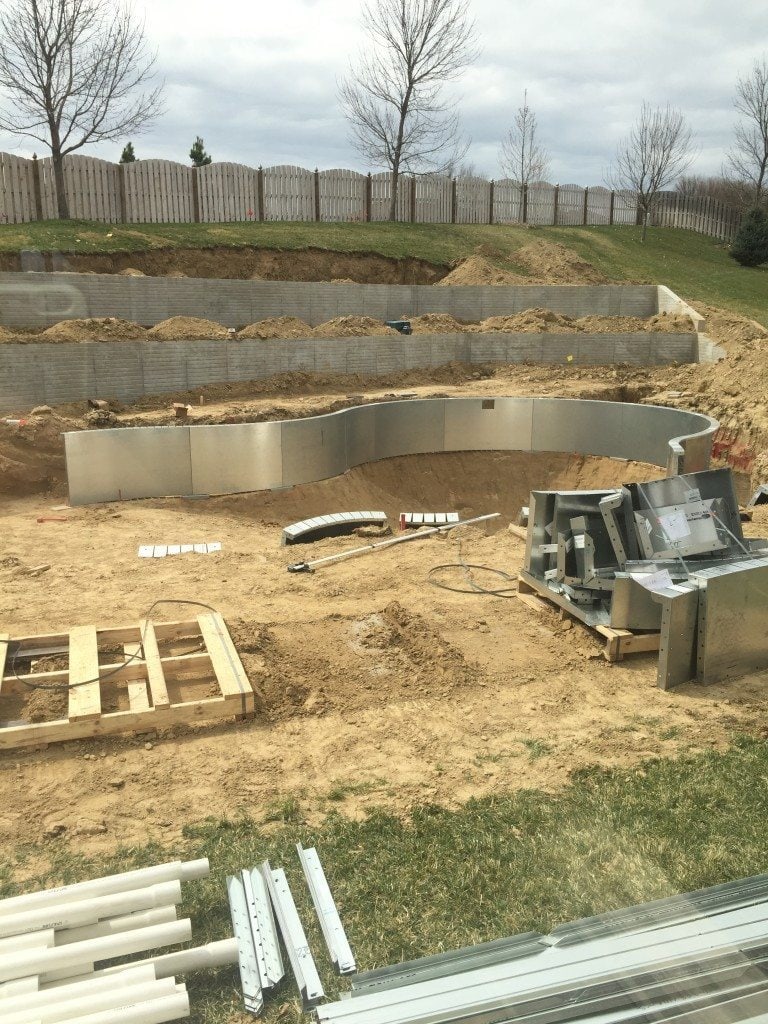 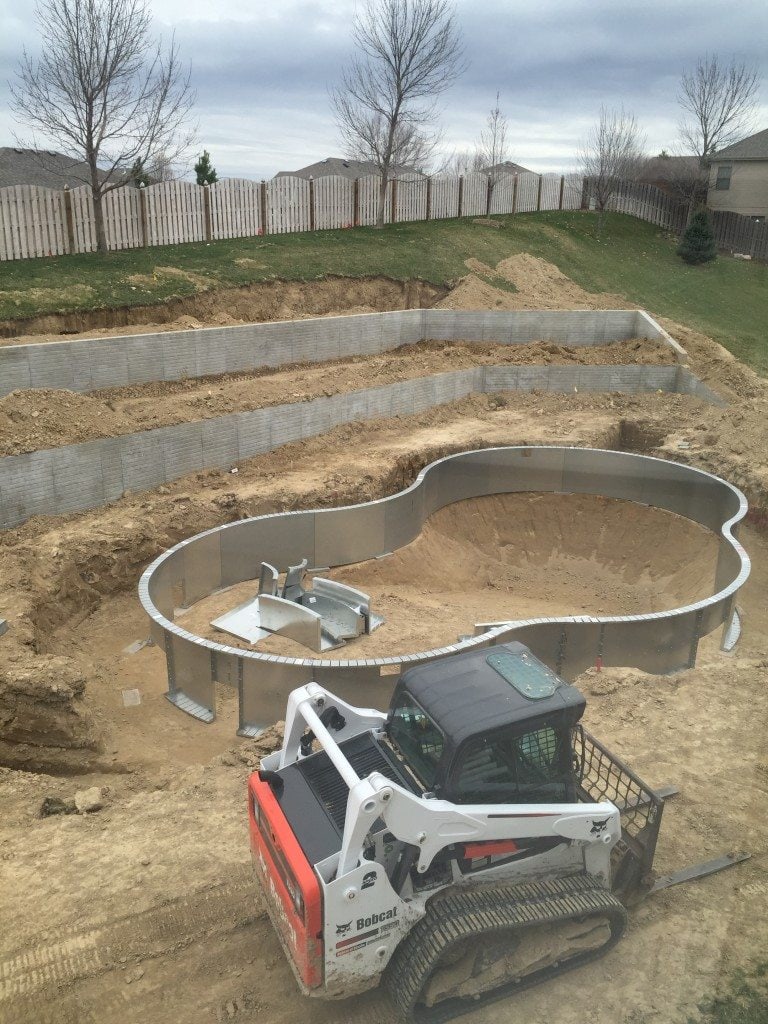 When I came home Wednesday, our benches and stairs were in! 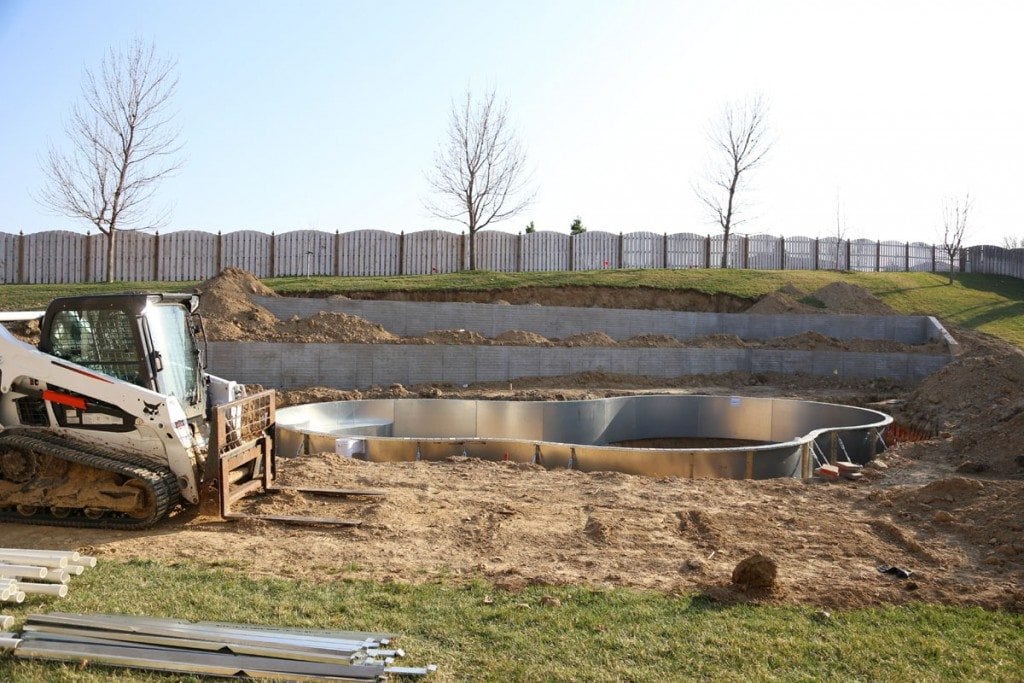 The same view five weeks ago: 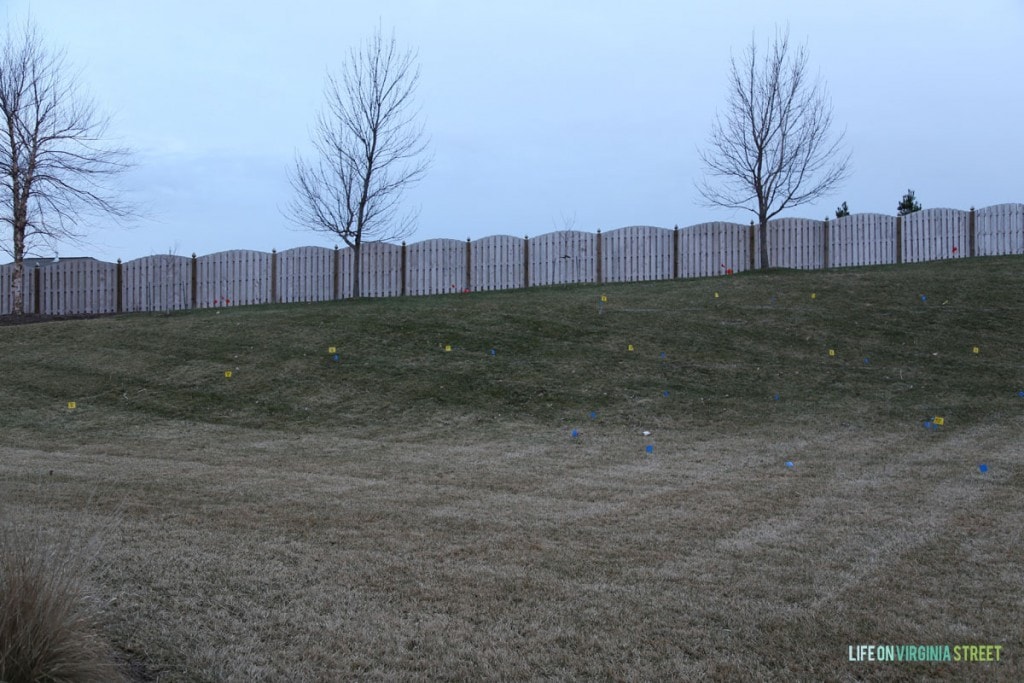 Some more detailed shots of the stairs and benches. We asked for extra benches along the one bump out to accommodate more people on the days were are all just chilling and lounging. 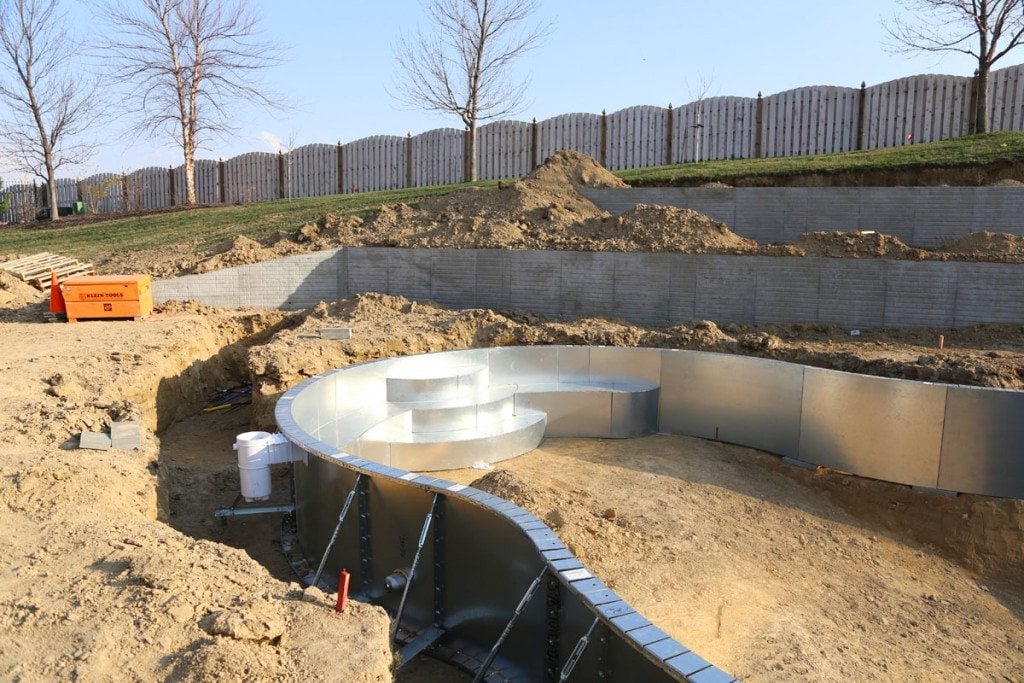 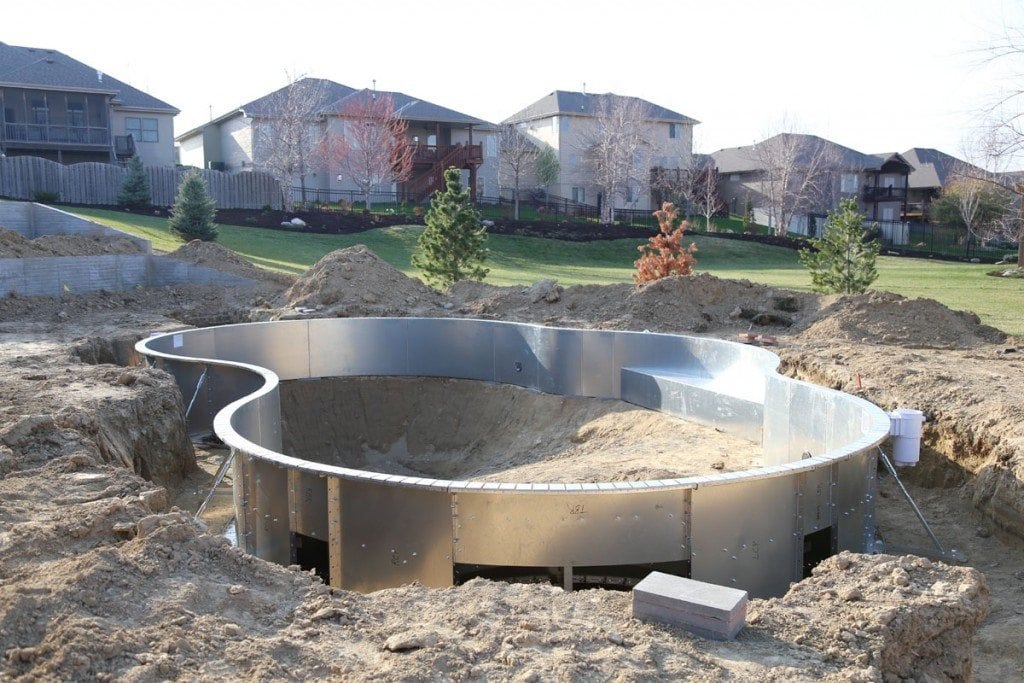 I feel like the metal makes the strangest glow in our backyard right now. It feels a bit like aliens are about to abduct us or we have angels descending upon us.

And every single time we go outside to look at the progress, the cats freak out that they can’t join us. They probably want to come out even more because they can’t see through our filthy screen door 😉 You should have heard the cries coming from the four of them – you would think they were being tortured. And in their minds, they were because they weren’t allowed outside. 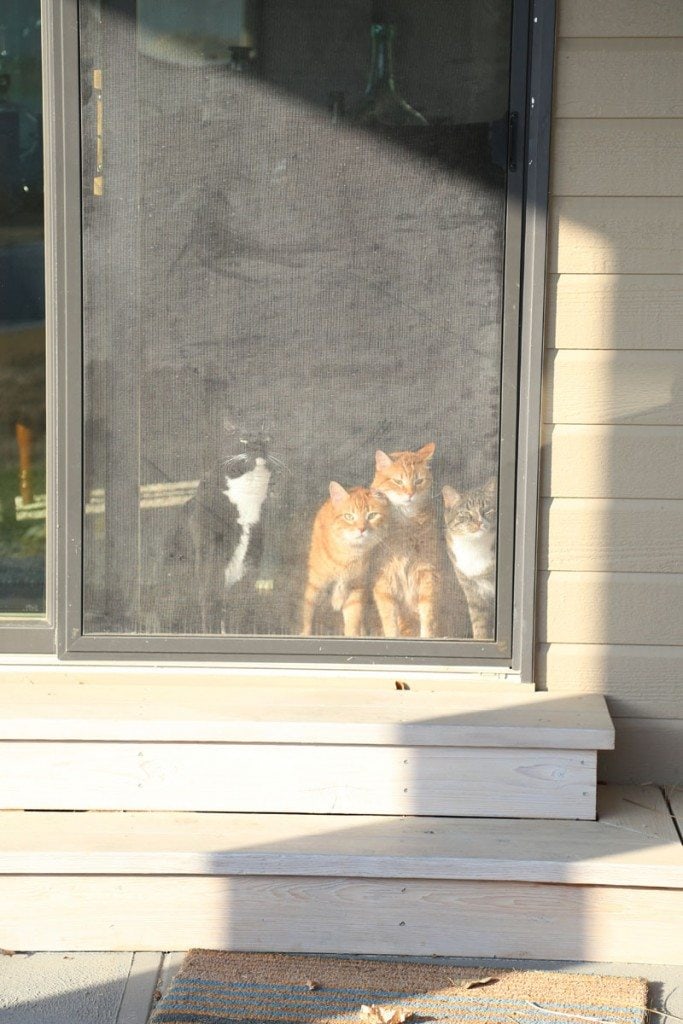 We’ve had some discussions about wall caps. The caps we’ve looked at at local stone stores run about $30 each (for a one foot long cap). It is completely asinine. We have nearly 245 feet of wall that needs capped, and the last thing we want to spend over $7k on is walls caps that we won’t even notice. Keep in mind it will be four feet high of the ledgestone we selected with this just sitting on top to finish it off.

My husband found this option at Lowe’s a few weeks ago. It’s nothing amazing, but they are about $1.80 each. I repeat – $1.80! They have the rough fronts we were looking for and come in this brownish color or more of a gray tone. I think the gray may be a bit too cold and modern looking. I’m going to mock it all up on our wall this weekend, but this definitely seems like the route to go. $441 vs. $7,300+ seems like a no brainer for something this benign. 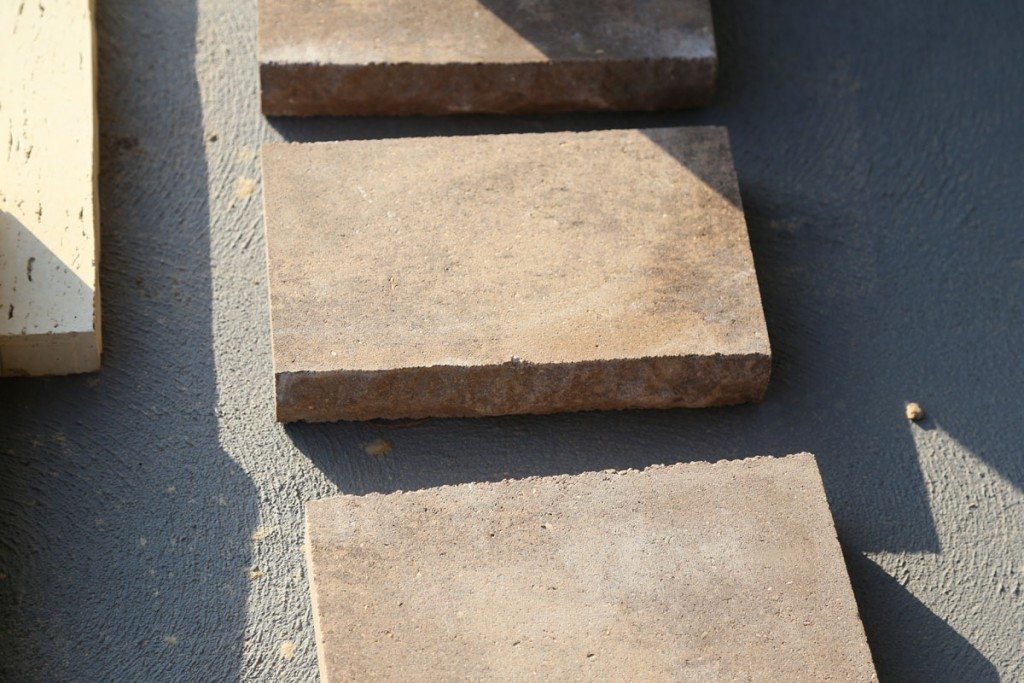 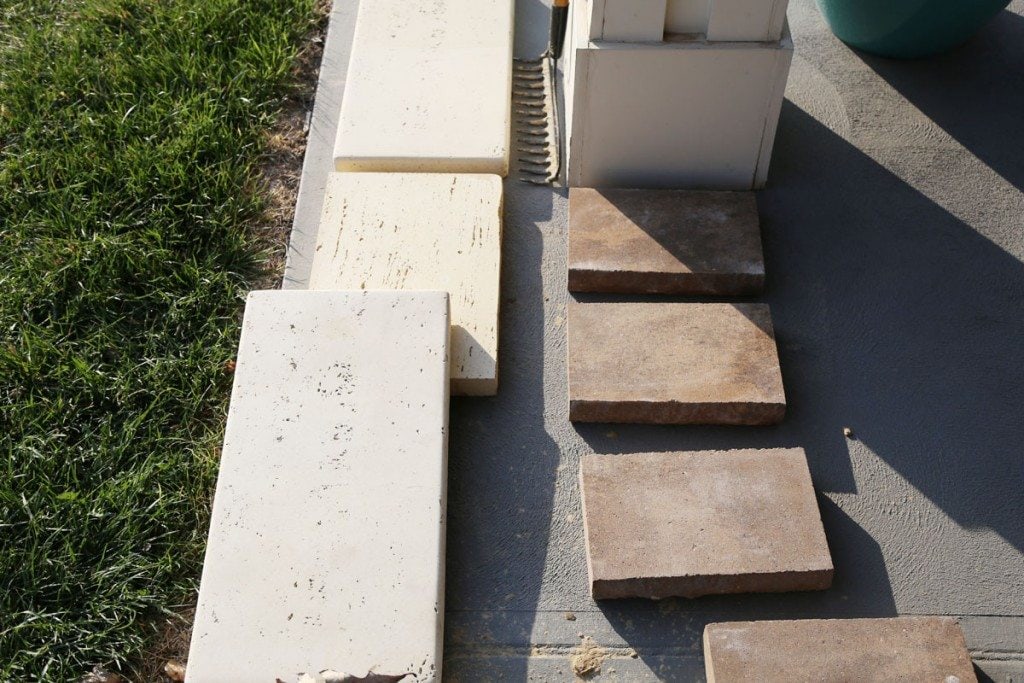 Next up, we had to make a decision on paver pattern. We were given three pattern layouts below, that would then dictate how much of each paver size we needed. 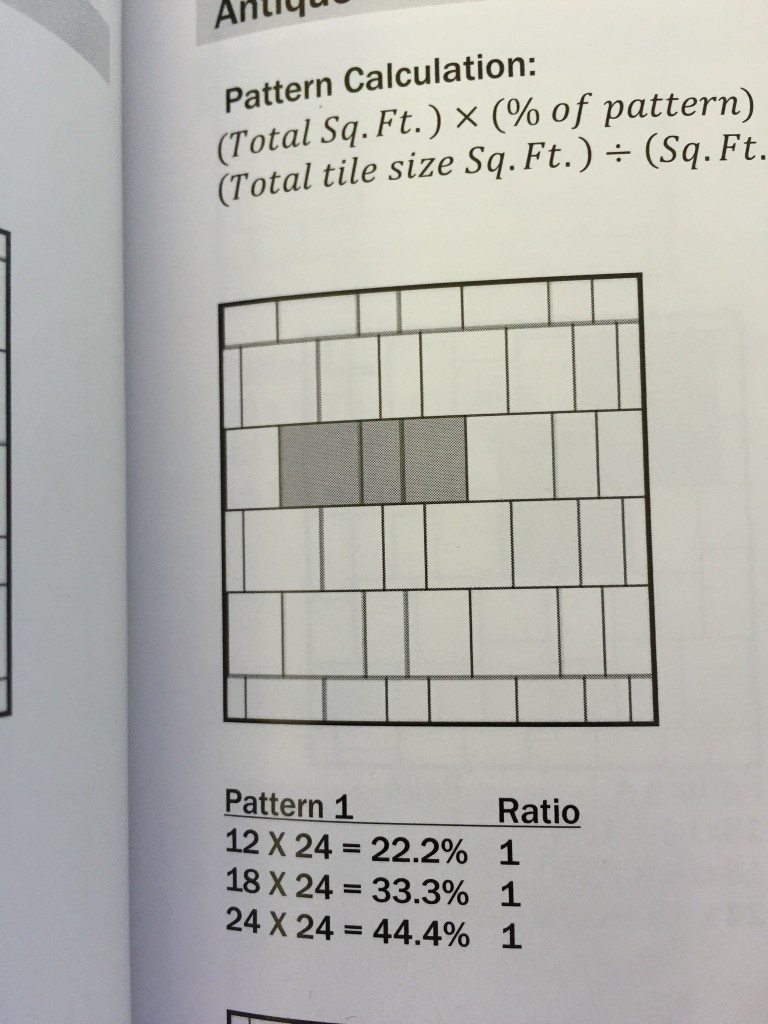 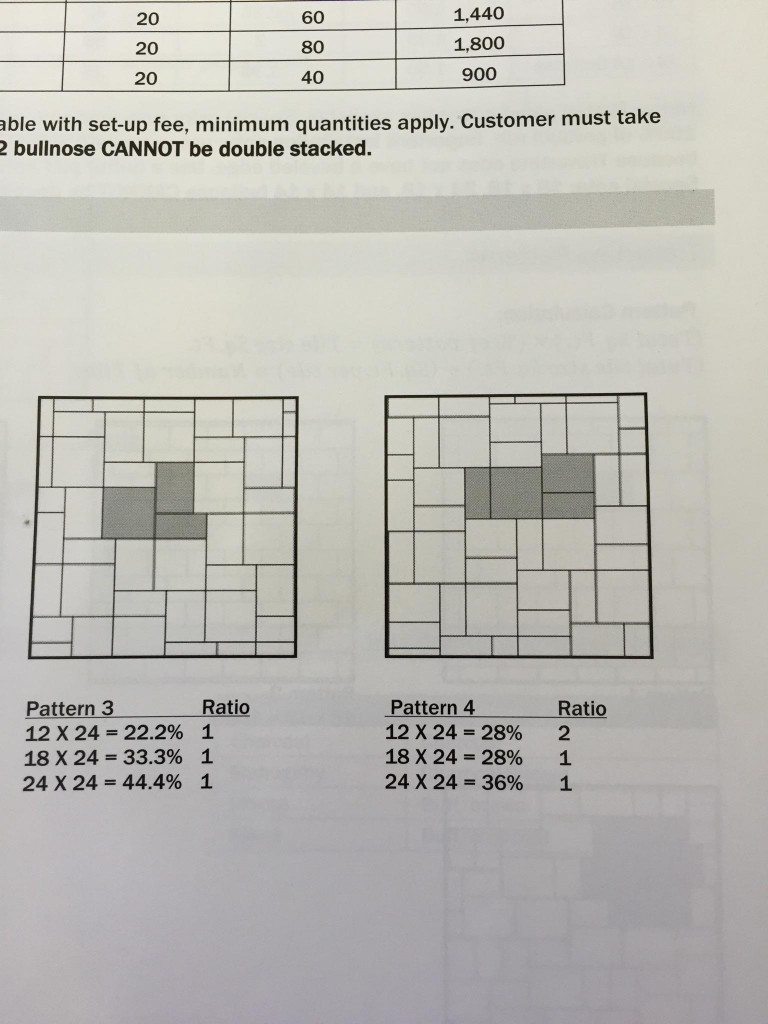 We ultimately decided on Pattern #1. We new the last pattern was out because it had a larger ratio of the smallest piece. I think we were indifferent on the first version the second (labeled as Pattern 3), but ultimately ended up on the first one because we felt like it was the least traditional of patterns. Honestly, since we’re dealing with a pretty low contrast paver and no grout lines (like tile) I don’t think the pattern will steal the show. So, simple and clean won out.

I’m scared to pull the trigger on anything design/decor-wise until I figure out the outdoor furniture situation. We know that the chaise lounges by the pool are our top priority to have day one. From there, we’ll gradually add more to the space (once I can save up more money for it). But until the chaise furniture and fabric is picked, I don’t want to order any of the fun stuff like pillows, curtains, planters, etc. for fear that they won’t all work together. So, hopefully I can finalize those choices soon, as well.

Can you believe all the progress this week? Next up we have a lot of plumbing and electrical, as well as the concrete for the footers and the pool walls! Have a great weekend!