Today I have a post for you unlike any you have ever seen in the past. And it is pretty amazing, if I do say so myself.

I’ve teamed up with some of my favorite bloggers (and their husbands!) to bring you…..”So I Married A Blogger”.

My husband, Kurtis, is taking over the show today and I think you are going to appreciate (or not?) what its like to be married to me. As a sidenote, have I ever mentioned that “So I Married An Axe Murderer” was one of my all-time favorite show growing up?!? Woman. Wo-man. Woooah-man. I’m guessing that the three other people in America that saw this show in the early 90’s are laughing and the rest think I’m crazy. I might have the entire movie memorized.

Moving on! My talented and beautiful friend Claire, of Claire Brody Designs, is interviewing her favorite blogger husbands in honor of Valentine’s Day. And it will likely be my favorite posts of the entire year because these dudes put up with a lot. And I admire their sarcasm (as well as their amazing wives). So, without further delay, the questions, and Kurtis’ answers (100% unedited by me, against my will).

Meet Kurtis. We’ve been married for ten and half years. He doesn’t like to be on the blog too frequently, but he’s a total babe and smarty-pants, and I’m sure he’s going to lie/exaggerate on all of the answers below. Don’t trust anything he says. Seriously.  :/ 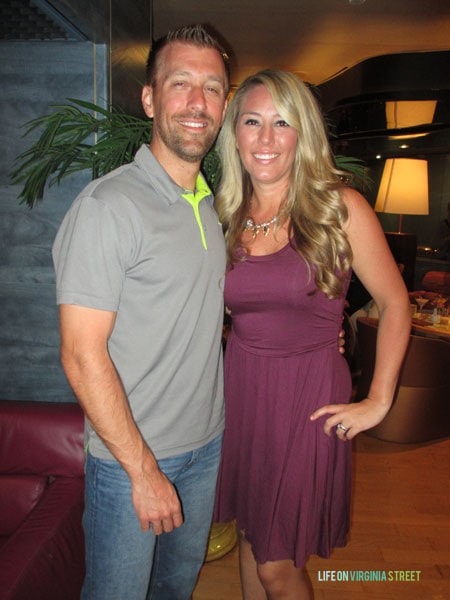 How involved are you with Sarah’s blog?

If by involved you mean I have to talk about it with her non-stop, then I would say I work on it as hard as she does. Otherwise, outside of constantly doing “blog content” projects, I’m not very involved.

How often do you read the blog?  Are you an avid reader or do you see enough at home?

I don’t really need to read it since I live it every single day.  Plus, like most guys, I just like the pictures.

How much time does Sarah spend on her blog? What are her hours like?

As her tagline/bio says, she is working on her blog every waking hour she isn’t at work.  During the week, we usually eat out and then come home and she works on it until bed.  On the weekend, it’s pretty much sun up to sun down.

Are you the cheap manual labor or is there hired help for that?  In other words, does Sarah use you for your handy work?

Beachy chic.  I think I just lost my man card for saying that.

How often does your home change?

It is in a constant state of flux.  I joke with Sarah that she has painted some rooms so many times we have actually lost square footage. The sad thing is, it probably isn’t a joke.

How many different sofas have you had since marrying Sarah?

Three… which is two too many.

How often do you offer decorating advice?  Does Sarah consider your opinion?

I love offering my advice to Sarah on pretty much everything.  I would say she actually “considers” it about once a year.

What’s your favorite room in the house? Why?

Any room that Sarah hasn’t spent money redoing… so that officially leaves none.

What does it really look like behind the camera?

Like a tornado came through an area hit by a hurricane.

What is a project that you hate but have never voiced (or maybe you have)?

Anything that involves a throw pillow. Throw pillows on our furniture is the equivalent of iceburg lettuce in my stomach. It is a waste of space and takes up valuable real estate. Every time the throw pillows end up back on the couch, I voice my thoughts to Sarah after I throw the pillows back on the floor.

Do you know of Sarah’s blogger friends?  If so, who’s your favorite?

Oh I “know” several of them…by their blog or Instagram name only.  The ones that come to mind are Rain on a Tin Roof, Cassie Sugarplum, Lindsay Letters, Honey We’re Home and Mandy and Such.

My favorite would have to be Mandy from mandyandsuch because she’s the only one I’ve actually met in person and she’s seems pretty cool.

What’s your favorite aspect of Sarah being a blogger?  Least favorite?

My favorite aspect has been watching Sarah grow with this blog.  It has made her more confident and social and it has been cool to watch.  My least favorite is when I get suckered into helping with projects because she has a posting “deadline” or when she buys stuff and says its for the blog – when I know that’s just a convenient excuse for her to buy more.

What are your household chores?

Most everything, based on my answer of how much time Sarah spends on her blog.

What’s something about Sarah that her readers might not know (but she would be okay with you sharing)?

The toughest part of this question is what she would be okay with me sharing because I have some really funny stuff I could share.  Umm, that she attended Math Camp in college…nerd alert!!

What does Sarah REALLY want for Valentine’s Day, and what are you getting her?

I’m going to go out on a limb and say something for the house.  I’m getting her whatever she says I bought her. 🙂

So, there you have it folks! Thanks to Kurtis for taking to the time to answer the questions and for all that “work” you apparently put into my blog… And for the record, I did not go to “math camp” in college. It was a conference. Centered around math and proving theorems. Way less dorky 😉

Now, be sure to check out what all these other spouses have to say about their blogging wives: