I interrupt the usual pretty photo updates with a public service announcement that hit a little too close to home for us this past weekend.

If you have ever asked yourself the question, “Does it really matter if I use a higher watt lightbulb than my light fixture recommends?” – the answer is a resounding yes. And if my description below doesn’t convince you, perhaps the photos that follow will.

Case in point. A few weeks ago I noticed that two of the three light bulbs were burnt out in the fixture in my craft room. It was about the time I was compiling this tutorial and the low light was killing me. I asked my husband to swap out the bad lights. We noticed that the two that were burnt out, as well as the one functioning light, were 100 watt light bulbs although the fixture clearly stated 60 watt maximum bulbs {this means 300 watts were trying to be produced in a 180 watt max fixture. We’re guessing the prior home owners didn’t realize the implications as this was their home school classroom and they may have been needing additional light}. Taking note, we replaced all three bulbs with only 60 watt bulbs. But, an odd thing happened. When we turned the light switch back on, the two previously burnt out lights started crackling and flickering.

We thought it was a faulty fixture {or that the old bulbs had caused it to become faulty}, so we removed the two bulbs we had replaced, and only used with the one bulb that was still functioning until we could get a new fixture. This ensued for a week or two.

This past weekend, I decided to move the old ‘boob’ light from the queen guest bedroom into the craft room after we installed the chandelier. It was actually the same style fixture that was already in the craft room but it appeared only 60 watt bulbs had been used in it when it was in the guest room. However, our progress halted once we actually started to remove the existing light fixture in the craft room {after all power to the room had been shut off from the main breaker panel}. Look at what we found: 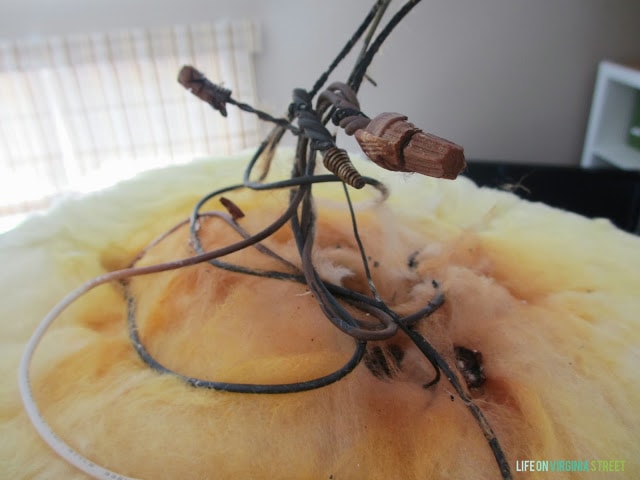 That’s right – a total fire hazard that likely could have occurred rather soon. The scariest part was that if it weren’t for my addiction to changing out light fixtures so frequently, we may have never noticed it until it was too late. There was bare electrical wire touching bare electrical wire – a REALLY bad thing. In fact, it may have been to the point that it was sparking up there {hence the burnt plaster and insulation}.

I’m grateful we caught this oversight when we did. Unfortunately, the wires appear to no longer be usable so we are going to have to hire an electrician to come fix the problem that could have easily been avoided. We quickly checked the remaining original fixtures in our home to ensure there were no other potential hazards and left the power off in this room permanently to ensure we don’t have any issues until the wiring can be resolved.

Moral of the story? If you recently moved into an existing home or are guilty of using too high of wattage bulbs, check your fixtures and change your bulbs out ASAP if you aren’t at or below guidelines! Hopefully this message will resonate and prevent some potentially unnecessary home fires in the future.