I spent most of the weekend at the US Senior Open so I didn’t have much time to work on the house. But that didn’t stop the ideas from spinning around my head. Now that I have mostly wrapped up the “queen” guest bedroom project, my mind is all over the board as to which project I should tackle next. There are several rooms on my radar {one obviously being our master bedroom}.

I think I’m going to move forward with the King Guest Bedroom {guest bedroom #2 in my tags} – mainly because this is the guest bedroom that actually gets used – due to the California King size bed. 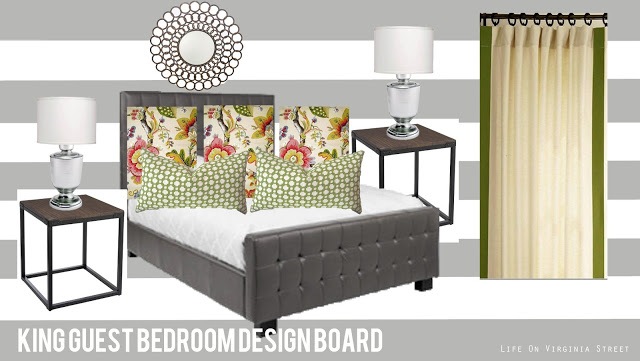 Before we even moved into the house, I was dreaming of stripes in one of the rooms. I’ve been going back and forth in my mind if it should be the king guest bedroom, the laundry room or my craft room/workout room.  And for reasons mentioned above, the king guest bedroom it is – this room is begging for a little personality.

Here is a reminder of the room currently {photo taken two weeks after we moved in back in December, but not much has changed}. 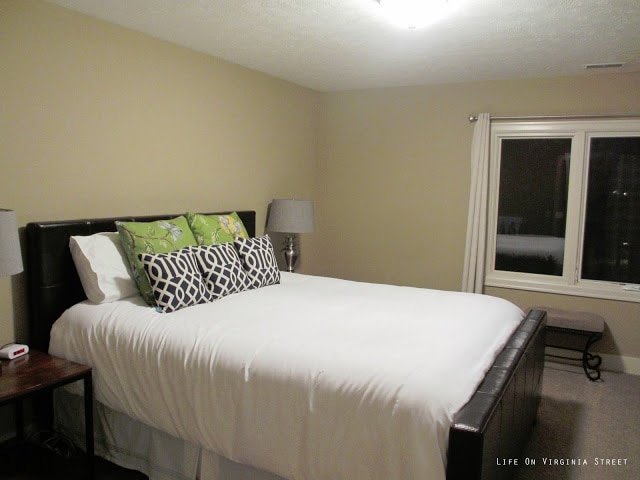 In the design board, I plan to use our existing bed from Z Gallerie, as well as the existing nightstands and lamps {but will change out the shades}. The biggest project will obviously be painting the stripes {as I plan to do the full room and not just an accent wall like I did in our last master bedroom} – they will be much more subtle than they appear in my mock-up above. The fabric I’ll likely use for the Euro shams will be Braemore’s Wonderland Pearl and then I’ll use more of Celerie Kemble’s Betwixt, but this time in Grass. I likely will re-use the ringed mirror I had hung in our old bonus room and will make some drapes similar to those in the image from Pottery Barn {using white in lieu of off-white material}. My only expense should be the fabrics and cost of paint – not bad!

Because of the dry time I will allow after the base coat of white paint – prior to taping off stripes for the gray color – I’ll be able to tackle another project or two in the interim. Maybe even painting the master bedroom. We’ll see just how ambitious I get 😉