A few nights ago I was shopping for some new reads on my nook.  Nothing was catching my eye until I stumbled upon Food Rules:  An Eater’s Manual by Michael Pollan.  If you know me, you know I only read for pure entertainment – I hate anything that is serious, sad, or thought-provoking.  So, obviously this was a strange selection for me.  It is NOT a diet book – rather, it teaches you to think about what you are buying when you are grocery shopping and eating {which I always struggle with}.  Granted, many of these 64 rules are pretty obvious, but it gives you that added thought process when shopping.  It also grosses you out when you think about American eating habits and the fact that we pretty much eat everything other than ‘food’. 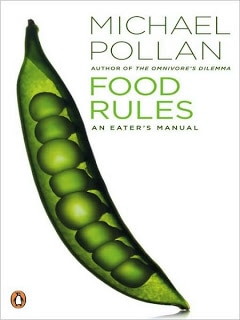 Here are some rules I found rather interesting:

Even if you don’t rush out to by the book, hopefully some of the rules above will get you thinking about what you are buying and putting in your mouth.  Reading about all the additives and preservatives in food kind of freaked me out {even though I have always known about it}.  The food industry has much to gain by making the ‘food’ on our shelves last longer.  I am going to make a more conscious effort to buy food fresh.

This book is a very quick read and was very cheap in electronic format (probably one of the only reasons I bought it).  And it is ‘lendable’ for those of you that have a nook, so let me know if you want me to send you a free copy!